Changes to the way oil and natural gas drilling is permitted in Colorado may lead to “significant delays” in permitting and other necessary approvals for developing the Wattenberg field in the Denver-Julesburg (DJ) Basin, according to PDC Energy Inc. management. 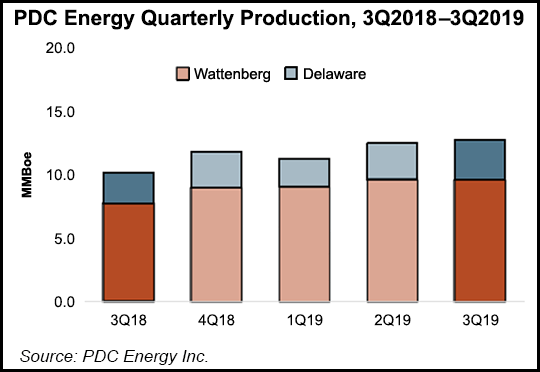 While required data is gathered and best management practices are updated, permits are going to be “scrutinized: when there are structures within 2,000 feet of operating activity “compared to the current distance of 1,500 feet,” said COO Scott Reasoner.

Reasoner referred to the state’s permitting changes for setback distances, a key component of Senate Bill 181, which was signed into law earlier this year.

Any regulatory effects on the drilling pace should become clear in 2021 as PDC’s permit inventory is expected to sustain the drilling plan through 2020, including permits acquired when it completed the $1.7 billion acquisition of Colorado pure-play SRC Energy Inc., Reasoner said.

“We may experience significant delays in the issuance of permits and necessary approvals as a result,” the company said in a filing with the Securities and Exchange Commission. “If the merger is completed, the percentage of PDC’s combined properties, production and reserves located in Colorado will increase, and our exposure to the risk of unfavorable regulatory developments in the state will therefore increase as well.”

“Although this will add work to our existing permitting process, we believe that we will be able to work” the Colorado Oil and Gas Conservation Commission “to obtain permits that will allow us to continue to operate in a safe manner,” Reasoner said.

PDC saw healthy gains in production during the third quarter, even before factoring additional output from the SRC acquisition. The transaction is expected to close in early 2020, slightly later than the 4Q2019 closing date originally anticipated.

Production increased from a year ago by 26% to 12.7 million boe. At the end of September, PDC had 138 gross operated wells in the Wattenberg and 21 in the Permian Basin’s Delaware sub-basin. Wattenberg production averaged 103,554 boe/d, up by 24% from the year-ago period. Volumes came in at 34,641 boe/d in the Permian Delaware, up by 33%.

Fourth quarter production is likely to remain flat sequentially, with growing Wattenberg output offsetting a decline in Permian production. Delaware output in 4Q2019 is expected to drop by 5-10% sequentially because PDC plans to turn no additional wells in line for the remainder of the year. Heading into 2020, production could decline from the lack of turn-in-lines in the final three months.

Completions are expected to begin again early next year, “and that should bring an uplift in the second quarter, and the third quarter,” CEO Bart Brookman said. Output could flatten or slow again late next year depending on capital expenditures.

In the Wattenberg, fourth quarter volumes are expected to increase modestly because of a “gradually improving basin-wide operating environment,” management reported.

The Wattenberg’s drilled-but-uncompleted (DUC) well count should start next year at 220. PDC plans to bring its DUC count down to 75-100 throughout 2020, said CFO Scott Meyers.

“We do anticipate some strength in NGL pricing because both those two pipes go to Mont Belvieu,” the NGL hub near Houston, and it has “a premium price,” said Executive Vice President Lance Lauck, who handles corporate development and strategy. “Beginning here in the fourth quarter, there will be some strengthening.”

“We think we’re in a good spot for improvement clearly over the third quarter,” Lauck said. Some of the strength would be structural amid the increased takeaway to Mont Belvieu, and some strengthening would be cyclical as propane demand typically rises during the winter, he noted.

PDC reported quarterly net income of $15.9 million (25 cents/share), up from a net loss of $3.4 million (minus 5 cents) in the year-earlier period.