Under a settlement of a pending court case, the federal Bureau of Land Management (BLM) office in northwestern Colorado has agreed to reevaluate air quality impacts on 34 authorized, but not yet permitted, oil and natural gas drilling projects in the western part of the state. 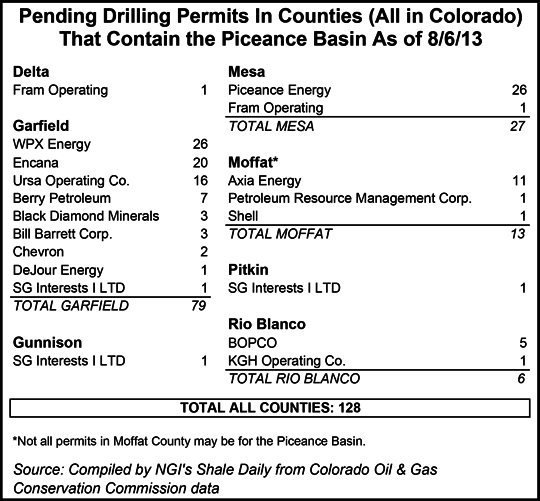 The action results from a settlement of a lawsuit filed two years ago by four environmental groups in federal court, alleging that BLM illegally approved dozens of oil and gas projects in the Piceance Basin in western Colorado without analyzing the impacts on air quality (see Shale Daily, June 16, 2011). The lawsuit was filed in U.S. District Court for the District of Colorado by the public interest law firm Earthjustice on behalf of the Wilderness Workshop, the Natural Resources Defense Council, the Sierra Club and the Wilderness Society.

A focus of the legal challenge was the BLM’s use of area-wide air quality models developed as part of the agency’s large land-use planning process used to determine what tracts of federal lands will be made available for possible oil/gas lease sales. The model is established before specific projects are authorized to seek permitting for oil/gas drilling.

“The process is very complex; it takes months to complete, and it is very detailed,” a spokesperson in the BLM’s Colorado River Valley office in Garfield County and the southern Piceance Basin, told NGI‘s Shale Daily.

Previous to the 34 projects getting their initial authorization, BLM completed an air shed model that had been created for the Rhone Plateau under the large land-use planning process. Although the 34 projects are not within the Rhone area, they were within the air shed and thus BLM used that air quality model to provide initial authorization to the projects, all of which still would need to get individual permits.

The Wilderness Workshop and others challenged BLM’s use of the Rhone air quality model in these 34 instances. “We still think that’s a valid use of that model,” said the BLM regional office spokesperson, noting that the reason the agency settled the court action was because on a separate legal action involving the Rhone model.

In late 2011, BLM completed an updated air quality model for its entire field office at Silk, CO, so since then the agency has used the newer model in authorizing projects since the challenge by the Wilderness Workshop, et al., in 2010. And since the summer of 2012, the agency has been reassessing air quality impacts on any authorized projects previous to that when those projects apply for a formal permit to start drilling.

Essentially, under the settlement, BLM has agreed to continue doing what it has been doing since late 2011 for new wells, and since the middle of 2012 for previously authorized wells, such as the 34 now in play, the spokesperson said. In addition, the settlement calls for BLM putting more of its information on authorized projects online.