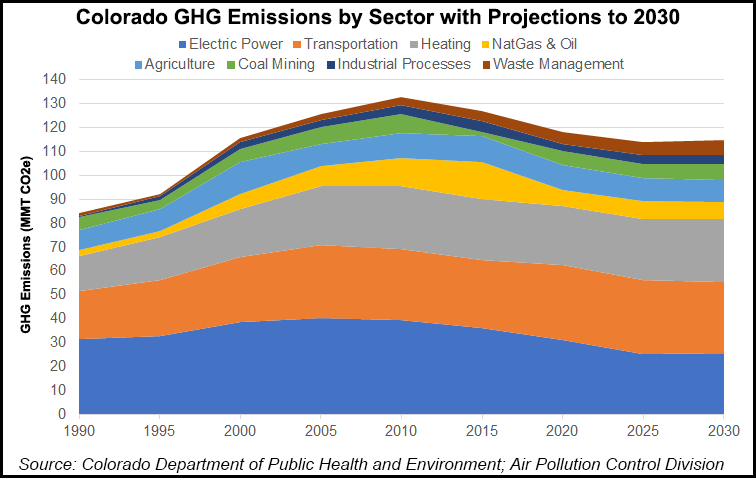 The rules mandate “the capture or control of a significant portion” of methane emissions from oil and gas production sites, pipeline operations and midstream facilities; expanded inspections at oil and gas facilities, including production sites and compressor stations; performance testing of enclosed combustion devices designed to reduce VOC emissions; and improved transparency and accountability in the state’s annual emissions inventories, said the Colorado Department of Public Health and Environment (CDPHE).

The department’s Air Quality Control Commission (AQCC) unanimously approved the new rules, which could reduce greenhouse gas (GHG) emissions from the oil and gas sector by more than 4.8 million tons annually, according to regulators.

“Colorado continues to be an innovative leader in reducing emissions from the oil and gas sector,” said CDPE’s Jill Hunsaker Ryan, executive director. “This rule puts Colorado firmly on the path to meet our 2030 emission reduction goals from the oil and gas industry – a 60% reduction from 2005 levels – and it paves the way for others to use these model policies to globally address the warming environment.”

The rules also establish a greenhouse gas intensity program for oil and gas production sites statewide, the first of its kind in the country, AQCC said. The program will require operators to limit how much greenhouse gas operators can emit per unit of production.

“This approach will provide operators with the flexibility to achieve reductions in the most cost-effective manner, while allowing the state to achieve overall reductions across the industry necessary to meet Colorado’s climate goals,” AQCC said.

Citing an independent analysis by the Environmental Defense Fund (EDF), CDPHE said that even without the latest rulemaking, Colorado is on track to meet the goal set by the state’s recently passed House Bill 21-1266 of reducing oil and gas GHG emissions by 36% from 2005 levels by 2025.

“The oil and gas sector is one of the largest sources of methane emissions in Colorado, and we have been laser focused on finding innovative solutions that reduce emissions of methane and other greenhouse gases from the industry,” said Shaun McGrath, director of environmental health and protection at CDPHE. “This is good news for Colorado, and I’m confident there are more good days ahead when it comes to innovative, effective regulations that improve air quality and protect Coloradans.”

The American Petroleum Institute’s Lynn Granger, who heads up the lobbying group’s Colorado office, called the AQCC vote “important for Colorado.” Granger said, “The commission’s adoption of an emissions intensity program, the centerpiece of this rulemaking, is the first of its kind at the state level and allows operators the flexibility to reduce emissions proactively and innovatively, rather than via top-down mandates which could have hindered or slowed reductions by imposing a one-size-fits-all approach.

“Even prior to this rulemaking, Colorado’s natural gas and oil industry was on track to meet its 2025 Greenhouse Gas Pollution Reduction Roadmap targets, and the implementation of the emissions intensity program will ensure we meet our goals for 2030.”

Colorado Oil and Gas Association CEO Dan Haley was less effusive, saying the new rules will add as much as $140 million annually to the cost of doing business in the state, citing state estimates.

“That’s on top of the hundreds of millions of dollars added after last year’s rulemakings,” Haley said. “These excessive costs threaten economic growth and competitiveness and will add to the rising energy costs faced by consumers domestically and abroad.”

Granger also expressed disappointment about the rulemaking process, explaining, “Our industry spent most of the year in good faith conversations with stakeholders in pursuit of crafting regulations that were both feasible and effective. Then, in the final weeks prior to the rulemaking, new concepts with significant impacts to industry were introduced with insufficient time for industry, other stakeholders, and ultimately the commission” to assess them.

The Colorado rules follow a set of proposed federal regulations by the Environmental Protection Agency (EPA) for oil and gas methane emissions under the Clean Air Act.

The public comment period for the EPA rules is open through Jan. 31.