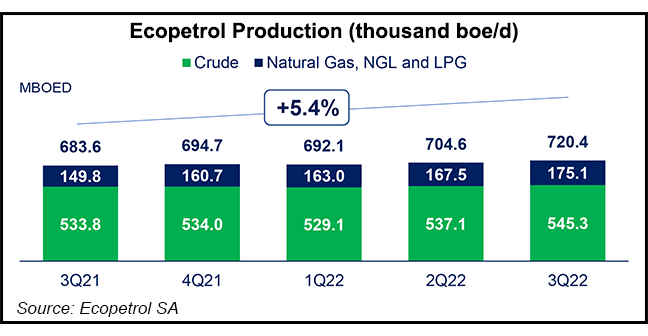 In an earnings call last month, CEO Felipe Bayón cited deepwater gas discoveries in the Caribbean in the Gorgon-2 with partner Shell plc, and another find by subsidiary Hocol SA in Cordoba department. He said this reiterates “Colombia’s potential for gas, the hydrocarbon of the energy transition.”

The country has now identified about 17 Tcf of gas resources, executives said. This would amount to about 10 years of supply.

Bayón has previously stated company intentions to up gas supply.

Production figures included the company’s joint venture with Occidental Petroleum Corp. in the Permian Basin’s Midland formation in West Texas. Net production to Ecopetrol was 43,800 boe/d in the third quarter, up 79.2% year/year.

Despite a directive by new president Gustavo Petro to halt new oil and gas contracts, existing contracts are being respected, executives said. In the first nine months of the year, Ecopetrol completed 407 development wells, up 42% year/year.

The company is promoting natural gas throughout the country as part of a strategy to lower emissions. It launched a pilot project for small-scale LNG into the district of Buenaventura to guarantee supply to the city. The liquefied natural gas project is expected to supply 45,000 users.

Another project would finance the purchase of around 4,000 heavy load vehicles powered by natural gas.

Bayón said the new board of directors “has expressed its support for the continuity of the 2040 strategy, which seeks to promote renewable and low emission energies while continuing with the exploration and exploitation of oil and gas.”

One point of contention has been a recently announced tax on upstream firms, but executives didn’t see it as problematic.

CFO Jaime Caballero said the new tax would kick in as the international price of crude rose.

Caballero added, “The other effect, which is royalties, we think, it’s relatively marginal.”

Bayón said overall, “We believe it represents somewhere between two to five points of incremental taxation for the industry. But at the end of the day, we don’t believe that’s a dealbreaker in terms of the economics of a given project.”

Hydraulic fracturing also has been halted by the new government. Ecopetrol was in the process of developing two fracking pilot projects. These are now suspended.

Bayón said the company would retain the acreage where the projects were being undertaken. “You know, long-term, we’ll see where that goes. In terms of cost implications, we’ve spent money on preparing for the environmental submission, the application of a license. We’ve done social investment in the area and we’ll manage that accordingly. We don’t see any issue with that.”

Other changes in Colombia have included improved relations with neighboring Venezuela. Recently, President Petro traveled to Caracas to meet Venezuelan head of state Nicolás Maduro. There since has been news that Venezuela would send natural gas to Colombia via its cross-border pipeline.