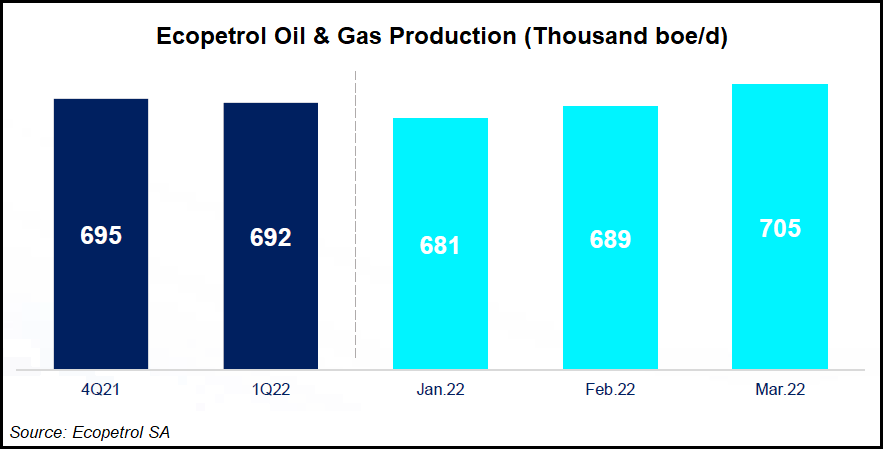 The companies, which also have a joint venture in the Permian Basin of the United States, plan to conduct seafloor sampling and drill an exploration well as part of the latest agreement.

Seismic data gathered at the blocks by Anadarko Colombia “indicate the possibility of significant accumulations of hydrocarbons,” Ecopetrol said. Exploration success would constitute “a transformational event in the Colombian oil industry,” the firm added.

The deal, which is still subject to approval by Colombia regulators, would give Ecopetrol a 40% non-operated working interest in the blocks. Anadarko Colombia would operate them with a 60% stake.

Unveiled in February, the “Energy that Transforms” plan calls for investment of about $1.8 billion in upstream gas projects during 2022-2024, focused on the Piedemonte Llanero and other onshore blocks, as well as the offshore Caribbean.

Ecopetrol’s offshore partners also include Shell plc. In late March, Shell began drilling the gas-directed Gorgon-2 deepwater appraisal well in the Purple Angel block, also located in Colombia’s Caribbean region. Shell holds a 50% operated interest in the well, with Ecopetrol controlling the remaining half. The goal of Gorgon-2 is to test the extent of the gas sands discovered in 2017 via the Gorgon-1 exploration well.

March also saw the spudding of Ecopetrol’s 100% working interest Cupiagua XD 45 exploration well at Piedemonte Llanero, which is “the largest gas production source in the country,” according to Ecopetrol.

The reactivation of exploration activity there “is very important,” Bayón told analysts during Ecopetrol’s first-quarter earnings call. “We’re putting a lot of capital into gas.”

Ecopetrol’s production from exploratory wells undergoing initial testing in 1Q reached 221,000 boe, with natural gas accounting for 67% of the total.

Ecopetrol’s total production averaged 692,000 boe/d during the first quarter, up 2.4% year/year, with natural gas accounting for 19.8% of the total. The increase was driven in part by the Permian joint venture in the Midland sub-basin, which now boasts 135 producing wells. The project reached average production before royalties of 61,400 boe/d in March.

Ecopetrol plans to drill a total of 18 gas-directed wells in 2022.

Longer-term, the “Energy that Transforms” plan envisions increased gas production, “along with a search for new commercialization options, seeking also to venture into regasification and storage,” the company said.

Ecopetrol reported net income of 6.6 trillion pesos ($1.63 billion) during the first quarter, up from 3.09 trillion pesos in the same period last year.