Private-equity backed Colgate Energy Partners III LLC is adding to its arsenal in the Permian Basin of New Mexico in a $190 million deal with an undisclosed seller. 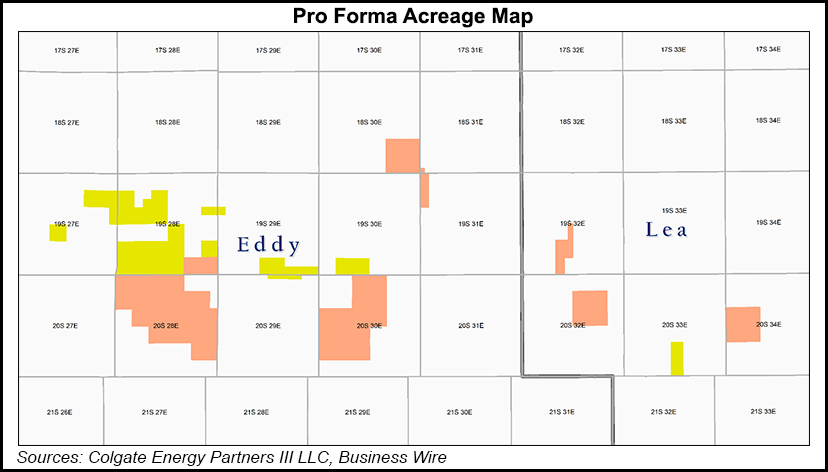 “Building on the transformative transactions completed earlier this year in Texas, this New Mexico acquisition adds to Colgate’s position as one of the premier private operators in the Permian Basin,” Co-CEO James Walter said.

Also in June Colgate acquired most of the assets owned by Luxe Energy LLC in an all-stock transaction. The deal included 22,000 net acres also in Reeves and Ward counties with production of about 17,000 boe/d net.

Co-CEO Will Hickey said the latest acquisition builds on Colgate’s existing inventory in the Delaware sub-basin, “where we have recently drilled some of the best wells in the company’s history. Given the depth of our current inventory, we have a very high bar for acquisitions and this one was just too good to pass up. We are excited to allocate rig activity to these properties next year.”

According to Colgate, the newly acquired acreage is 95% operated with a 78% average working interest. Estimated production currently is 750 boe/d net. The leasehold is expected to add more than 200 locations.

Pro forma, Colgate expects to control around 108,000 net acres across the Permian, mostly in Eddy, Reeves and Ward counties. It plans to keep operating five rigs across the holdings.

Colgate expects to finance the latest acquisition, set to be completed in early 2022, with cash and debt.