Natural gas futures rebounded Friday on colder trends for the second week of November, with more volatility from weather models for a market keenly focused on shifts in the temperature outlook. The December Nymex contract added 4.7 cents to settle at $3.284/MMBtu after trading in a fairly wide range from $3.166 to $3.313. January added 3.5 cents to $3.310, while February climbed 1.9 cents to $3.192. 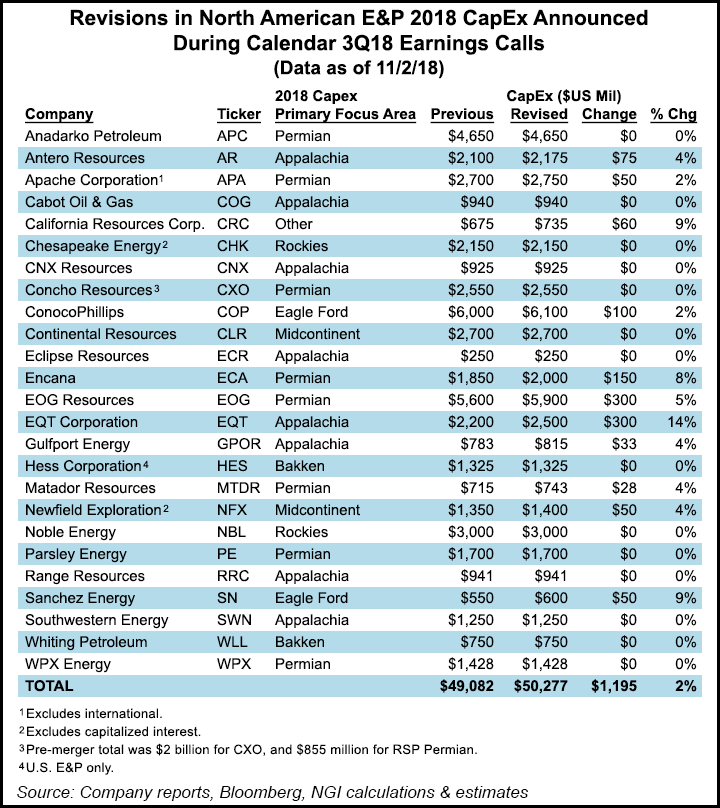 In the spot market, most regions outside of the Northeast declined heading into the weekend, especially in the West and in constrained West Texas; NGI’s Spot Gas National Avg. fell 15.0 cents to $2.855.

“Confidence is low as run-to-run changes in all weather models remain incredibly large,” Bespoke Weather Services said Friday. “Recent trends have been across all guidance, indicating our models as a whole are struggling to ingest upstream data. This is not surprising given an extremely volatile Pacific, but it does indicate that very significant model volatility should continue over the weekend and into next week, and that today’s cold trends that led to a major reversal in price were not the last forecast change we should see.”

Bespoke still expects warmer trends for mid-November and for bearish risks to eventually win out as balances loosen further.

“However, weather remains the sole focus this early in the season with stocks so low, and the colder trends early in Week 2 are both believable and intense enough to make the surprise spike in prices today justified,” the forecaster said. “The best warm signal we have been watching is mid-month, primarily from Nov. 13-20. In this time frame we would look for models to warm over the weekend, and we do look for a more solid long-range warm signal when we return on Monday.”

NatGasWeather noted a nearly 40 Bcf increase in projected demand based on the Friday afternoon European ensemble, a “massive amount between successive model runs in ensemble data.

A cold shot expected from next Thursday to Saturday (Nov. 8-10) “still looks to be more impressive than the reinforcing cool shot that follows Nov. 11-13, but the combination of the two should lead to considerably larger than normal heating degree day totals compared to the 30-year average and should result in the first weekly draw on supplies of the season,” the forecaster said.

Meanwhile, the Energy Information Administration (EIA) on Thursday reported a 48 Bcf injection into Lower 48 natural gas stocks for the week ended Oct. 26, slightly below survey averages. Last year EIA recorded a 65 Bcf injection for the week, and the five-year average is a build of 62 Bcf. Total working gas in underground storage stood at 3,143 Bcf as of Oct. 26, down 623 Bcf (16.5%) from last year and 638 Bcf (16.9%) below the five-year average, according to EIA.

While the week’s storage build widened deficits, it was loose on a weather-adjusted basis, according to analysts.

“Compared to degree days and normal seasonality, the 48 Bcf injection is about 4.3 Bcf/d loose versus the five-year average,” Genscape Inc. analysts Margaret Jones and Eric Fell said. “Total power generation was down around 4 average GWh versus last week.

Analysts with Tudor, Pickering, Holt & Co. (TPH) viewed the market as about 3.0 Bcf/d oversupplied on a weather-adjusted basis for the report week.

“Record high supply (87.7 Bcf/d) remains at odds with record low inventories (about 10% below the five-year minimum),” the TPH team said. “Cooler-than-normal temperatures through mid-November will likely cause prices to migrate higher, but prices remain capped by expectations for El Nino and ramping supply.”

After posting 1 Bcf/d sequential gains in each of the previous three months, Lower 48 natural gas production growth slowed for the first half of October to 0.6 Bcf/d, according to Jefferies LLC.

“The first half of the month was impacted by offshore and Gulf production that was shut in due to Hurricane Michael,” Jefferies analysts said. “Growth continued in the second half of October, which was up 1.2 Bcf/d compared to September and recently set a new daily high above 85 Bcf/d. October growth was driven by Appalachia (up 0.7 Bcf/d sequentially) and the Haynesville Shale (up 0.4 Bcf/d), offset by declines in other areas.”

“Combined, we estimate that these three producers represented about 30% of Appalachia dry gas production during 3Q0218,” they said. “If other gassy operators follow these initial Appalachia producers in showing more restraint on production growth, it could create more tightness in the gas market as we head toward a large uptick” in liquefied natural gas demand expected in late 2019 and early 2020.

With most of the Appalachia-focused exploration and production companies having reported earnings results as of Friday, based on their revised 2018 spending figures and consensus capital expenditure (capex) estimates from Bloomberg, Appalachia capex is estimated to rise 5% next year, according NGI’s Patrick Rau, director of Strategy & Research.

“That’s not nothing, but it’s certainly below the pace seen in more recent years,” Rau said.

Physical prices gained in the Northeast Friday as chillier temperatures were expected to move in over the weekend, while mild conditions pressured prices lower for weekend and Monday delivery across much of the rest of the country.

NatGasWeather on Friday was calling for a weather system to push through the East over the weekend, bringing heavy showers and lows down into the 30s and 40s.

“Warm high pressure will cover the western and southern U.S. this weekend with mild to warm conditions, which will expand to include the East” during the upcoming week, the forecaster said. A cool shot for the central United States in the week ahead was expected to “gradually push into the southern and east-central U.S. as the week progresses with lows of teens to 30s.”

Tennessee Gas Pipeline (TGP) was expected to begin a single-day pigging run Monday that would impact about 90 MMcf/d of flows through its Station 245 in Onondaga County, NY, according to Genscape analyst Dominic Eggerman.

“The pigging will reduce operational capacity through Station 245 to 815 MMcf/d,” Eggerman said. “Flows through the compressor station have averaged around 855 MMcf/d over the past 30 days, and have maxed out at 962 MMcf/d. Based on current forecasts, there is an upside chance for cold weather in New England” on Monday (Nov. 5) that “could likely drive demand to align with historical maximum nominations — potentially cutting about 90 MMcf/d of gas flows on TGP toward New England.”

Further upstream, prices strengthened in Appalachia as well. Dominion South added 8.0 cents to $2.800. Elsewhere, prices sold off across most of the middle third of the country Thursday, with even steeper declines posted in the West.

Northern Natural Gas had a system underrun limitation in effect for Friday and continuing for the next several days, citing “major underperformance at several Field Area delivery points located in the Permian Basin area. “Northern has limited operational flexibility due to high line pack and capacity constraints to accommodate underperformance at these delivery points,” it told shippers Friday.