Southern California Gas Co. (SoCalGas) in the past two weeks has had to withdraw natural gas supplies from its hobbled major underground storage facility Aliso Canyon, prompting protests on Tuesday by residential activist and environmental groups who want the 86 Bcf capacity facility closed. 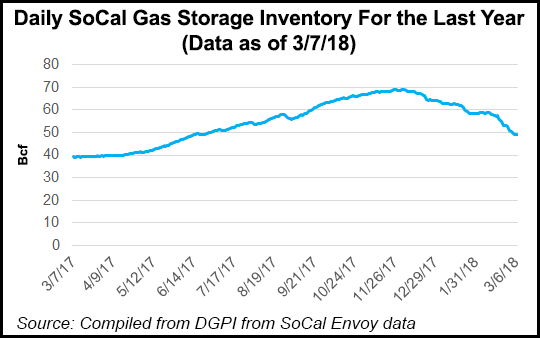 While the California Public Utilities Commission (CPUC) has approved each of the withdrawals since Feb. 19, representatives for the nearby residents’ group Save Porter Ranch and Food & Water Watch (F&WW) allege that SoCalGas is manufacturing a false shortage of gas supplies to justify keeping the 3,600-acre facility in service as the state’s largest source of gas storage.

Since a four-month storage well leak in the fall and winter of 2015-16, Aliso Canyon and its owner SoCalGas have been under close scrutiny from regulators, elected officials and the activist groups — some with members that were displaced during parts of the long leakage drama.

Last Friday, the Sempra Energy gas-only utility requested from the CPUC permission to “immediately” begin tapping Aliso for supplies to protect and preserve the volumes remaining in its other three storage facilities in Southern California that have been relied on heavily in recent weeks as colder-than-normal weather hit the region, slashing the maximum deliverability from the three operable fields by 240 MMcf/d to under 1 Bcf/d.

As of last Friday, SoCalGas officials told the CPUC the utility was down to 28.2 Bcf of storage inventory collectively at the three other facilities — Playa del Rey, Honor Rancho and La Goleta. As a result during the past week, SoCalGas used 930 MMcf of supplies from Aliso, according to Rodger Schwecke, senior vice president for transmission and storage.

Schwecke told the regulators that SoCalGas needed permission to “use Aliso Canyon to minimize the inventory reduction [in all of its storage] and preserve withdrawal deliverability for all its fields to mitigate supply shortfalls and any other unplanned outages.”

In response to the utility’s request, the CPUC agreed that the supplies from Aliso could be tapped following previously established winter protocol because the other storage facilities’ volumes had dropped to, or close to, their lowest allowable levels.

“Once gas demand returns to average levels, rather than the high demand levels seen [in Southern California] over the last 12 days [Feb.19 – March 3], SoCalGas should act to rapidly restore inventories in all storage facilities,” said Edward Randolph, the CPUC energy division director, in authorizing the utility’s request.

Disagreeing with the state regulators, Alexandra Nagy, F&WW’s senior organizer in Southern California, said that “once again, Gov. [Jerry] Brown and the CPUC are letting SoCalGas mismanage its gas supply to justify reopening Aliso Canyon, which is not needed and should be permanently closed.”

A final resolution on Aliso Canyon’s future is not likely anytime soon, although there could be some conclusions about the root cause of the massive well leak before the end of the year. Last fall, state officials indicated there could be an initial report this spring. However, an updated report last month from the consultant doing the investigation indicated a final report is targeted for late November this year.

A three-part study into the root cause has moved slowly on separate tracks and with little public attention over the last two years since the leak was stopped. It was one of 114 storage wells at the sprawling facility, and a root-cause analysis (RCA) investigation has been underway over the past 24 months.