Given political and legal developments in recent months that strengthen the state’s position in regulating oil and natural gas activities, the Colorado Oil and Gas Association (COGA) agreed Tuesday to dismiss its nearly two-year-old lawsuit against a city ban on hydraulic fracturing (fracking) passed by Longmont, CO, voters. 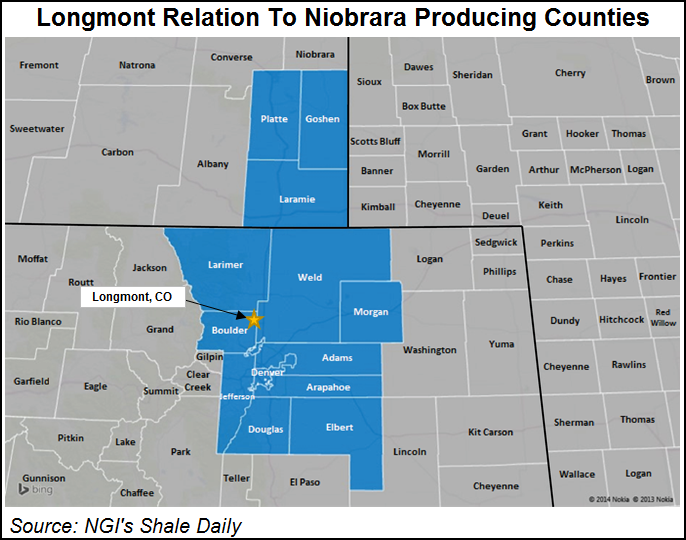 COGA officials said the industry association continues to argue that certain aspects of the Longmont regulations are preempted by state law, and are unlawful and invalid, but the agreement was reached among the city, COGA, the Colorado Oil and Gas Conservation Commission (COGCC) and other intervenors. They dismissed the lawsuit without prejudice.

COGCC originally filed legal action against the Longmont City Council for its passage in July 2012 of local oil and gas regulations that it alleged violated state laws. Late in 2012, the court permitted COGA to intervene in the lawsuit (see Shale Daily, Dec. 20, 2012). In the almost two years following, other cities passed similar measures and other court action was taken, including the threat of a lawsuit from Gov. John Hickenlooper.

“COGA has consistently treated legal action to resolve differences over oil and gas development as a last resort,” said Tisha Schuller, COGA CEO. Schuller said the dismissal was agreed to because there is only one exploration and production operator in the city, and it has a separate agreement with the city, and “because the courts are making it clear that local regulations do not preempt state law.”

Schuller pointed out that two other district courts hearing cases on Fort Collins and Lafayette fracking bans have also invalidated the local restrictions. “To date, the judges in three cases have agreed with COGA’s position,” she said. In addition, COGA has separately negotiated more than 30 local agreements across the state under what Schuller called a “balanced system of state and local regulations.”

The landscape in Colorado was further changed in August by a compromise approach engineered by the governor that now has a 19-member statewide task force working on legislative recommendations for meeting the needs of local communities while recognizing the need for statewide overall regulation of the oil and gas sector (see Shale Daily, Sept. 29).

The task force had its most recent meetings last Thursday and Friday in Durango where the members heard from local tribal and city and county government leaders, discussed the Southwestern Colorado Oil and Gas Development Study in La Plata County, and began to articulate key issue/problem statements that they will be dealing with in subsequent meetings.