In light of the redesign of Transcontinental Gas Pipe Line’s (Transco) Rockaway Delivery Lateral Project and significant changes in the construction schedule — from winter to summer — the Coalition Against the Rockaway Pipeline has asked FERC to extend the comment period by 120 days to give the public the opportunity to comment on the revisions. 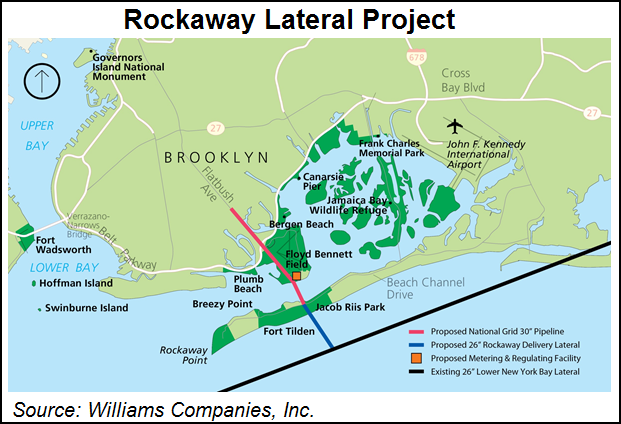 The extension would give the public time to assess Transco’s new proposal for the Rockaway Lateral, the coalition said. It also asked the Federal Energy Regulatory Commission (FERC) to issue a new draft environmental impact statement (DEIS) consistent with the project that Transco is now proposing.

Transco filed an application in January to provide an additional 647,000 Dth/d of natural gas to New York City and the Rockaways. The expansion of Transco’s system is targeted for service in the second half of 2014 (see Daily GPI, Jan. 9). The 3.2-mile pipeline would pass under Jacob Riis Park in the Rockaways portion of Queens and under Jamaica Bay to a new meter and regulator station on Floyd Bennett Field (a decommissioned airfield) in Brooklyn. FERC staff issued a favorable DEIS for Transco’s proposal to build a $182 million expansion in early October (see Daily GPI, Oct. 7).

“The construction schedule has changed but not the scope of the project,” said a spokesman for Williams, parent of Transco. “We recognize that there’s a lot of concern about the project, but the project goes at great lengths to minimize environmental impacts, and it is an important project for the city.”

On Oct. 18, two weeks after FERC issued its DEIS on the project and only days before public hearings in Rockaway, Queens and Brooklyn, Transco submitted 543 pages of new documents to the Commission, which included the “stunning announcement” that Transco is planning to carry out construction during summer months — the period of greatest activity in the Rockaway park and the marine environment, the coalition said.