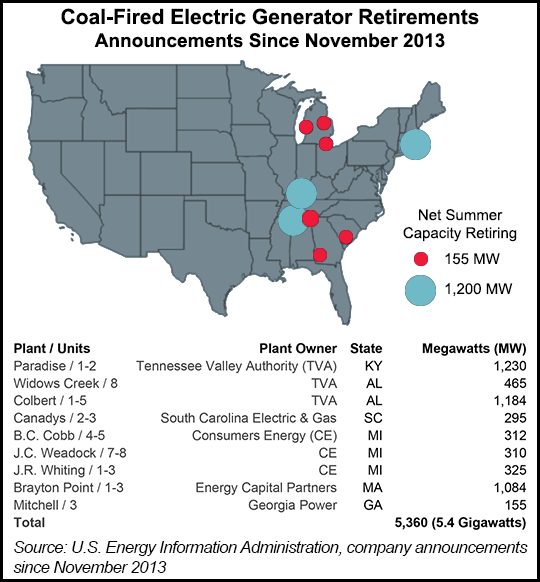 Since November 2013, an additional 5.4 GW of coal-fired capacity has been slated for retirement in the United States, all within the eastern third of the country.

AEO2014 projects 60 GW of coal-fired plant retirements by 2020, greatly increasing the projection from a 40 GW level used last year. This projection includes plants that have already been retired and included in past EIA reports. The new plants will be larger and more efficient than the earlier ones that closed.

The projected retirements in the upcoming AEO2014 go “above and beyond” what EIA reported previously as planned retirements by plant owner/operators. In the new projections, 90% of the retirements are slated to occur by 2016 when the first year of enforcement of the new federal mercury and air toxics standards (MATS) kicks in, EIA said.

For coal-fired power plants, MATS requires significant reduction in emissions of mercury, acid gases and toxic metals, and the standards are effective in April 2015. That deadline is conditionally allowed to be extended by up to one year by state environmental permitting agencies, EIA said.

“Retirement decisions are based on the relative economics and regulatory environment of the electricity markets,” EIA said. “A plant may retire if higher coal prices, lower wholesale electricity prices (often tied to natural gas prices), or reduced utilization make investment in equipment like scrubbers uneconomical.”

At the end of 2012, the United States had 1,308 coal-fired power generation units, totaling 310 GW of capacity, following the retirement of 85 units representing more than 10 GW of capacity.