CNX Resources Corp. got a lift from stronger first quarter commodity prices as it continued executing on a broader seven-year plan it laid out in 2020. 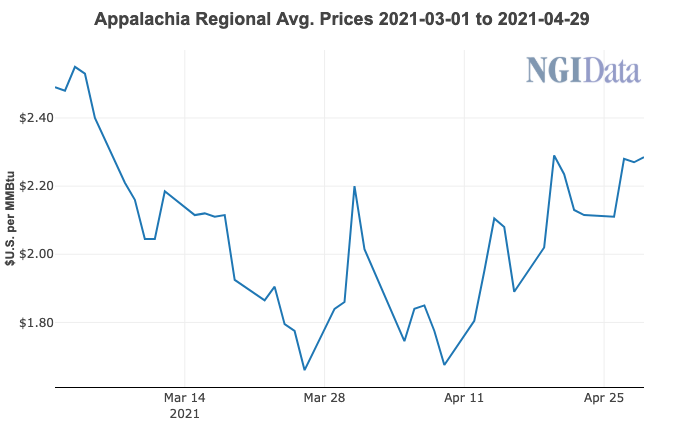 The company said free cash flow (FCF), up for the fifth consecutive quarter, came in at $101 million. It has also increased its full-year FCF guidance to $450 million from a previous target of $425 million. Between 2020 and 2026, the company is aiming to generate $3 billion in FCF.

The gains helped the company to cut net debt by $70 million and repurchase 1.5 million shares at a total cost of $18 million under an existing buyback program.

COO Chad Griffith said the Appalachian pure-play producer also expects costs to continue coming down as unused firm transportation (FT) capacity comes off the balance sheet and interest expenses are reduced. He said $10 million of unused FT would roll off this year, along with a modest amount in 2022, and another $20 million from 2023-2025 as contractual obligations expire.

“With these changes, and assuming all future free cash flow goes toward debt repayments, we would expect fully burdened costs to decrease around 90 cents/Mcfe — and lower — in the years beyond 2021,” Griffith told analysts Thursday during an earnings call.

CNX turned five Marcellus Shale wells to sales during the first quarter and plans to bring another 13 online in the coming weeks at an average cost of $650/lateral foot. That compares to deep Utica Shale well costs in southwest Pennsylvania of $1,420/lateral foot.

Griffith said the company brought online two deep Utica wells during the quarter. CNX has only four additional Utica wells planned in southwestern Pennsylvania through 2026, It also plans about a pad every year in the Utica window of central Pennsylvania. However, Griffith said the company is “excited about the deep Utica’s potential as either a growth driver if gas prices improve, or as a continuation of our business plan years into the future,” as costs for the wells continue to decline.