Now that its separation from the coal business is complete and with full control of its midstream assets, CNX Resources Corp. plans to “go on offense” and target the Appalachian Basin’s stacked pay potential to drive growth, CEO Nicholas Deluliis said on Tuesday. 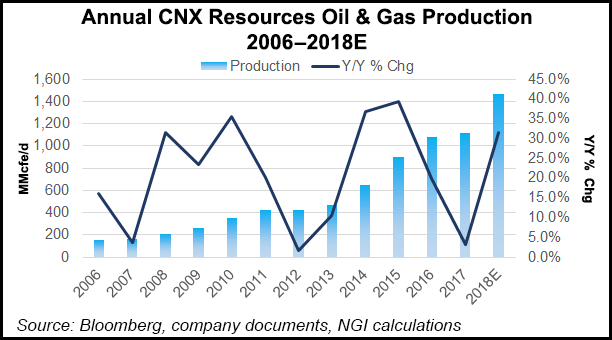 The company only recently finished drilling and completion activities at a new pad from start to finish for the first time since the downturn, a period when it was returning to existing sites to work. Going forward, management said, pads would be developed entirely with multi-well, stacked pay potential in mind.

“When we talk about stacked pays, it’s primarily Marcellus and Utica; there will maybe be some Upper Devonian mixed in there on occasion, but we’re talking Marcellus and Utica,” COO Tim Dugan told financial analysts during a call to discuss fourth quarter earnings. “And there is a strategy behind that that allows us to take advantage of some blending of dry Utica gas with damp Marcellus gas to keep our gathering and processing costs at a minimal level to avoid some processing on the damp Marcellus wells.”

CNX ramped-up activity at the end of 2017 to gain momentum heading into this year, when it’s guiding for 30% production growth. The company spent $233.4 million on capital expenditures during the fourth quarter, or $220 million more than Wall Street had forecast. Some financial analysts were underwhelmed by the overspend on quarterly production of 118.9 Bcfe, which missed consensus of 122 Bcfe.

Having only proved the viability of the deep, dry Utica in Pennsylvania last year, the play “is now a reality for CNX,” Deluliis said. CNX plans to drill four deep Utica wells in the state this year and turn-in-line another two, Dugan added.

Despite the increasing focus on the Utica in both Ohio and Pennsylvania, the Marcellus continues to drive volumes. Production there was 64 Bcfe in the fourth quarter, compared to the 33.8 Bcfe CNX produced in the Utica during the period. About 65% of this year’s capital budget is expected to be spent in the Marcellus.

Average realized sales price during the fourth quarter was $2.80/Mcfe, up from $2.77/Mcfe in 4Q2016. Better prices, along with discontinued operations from the coal business that were spun-off into a seperate company, helped lift fourth quarter revenue significantly from $74 million in the year-ago period to $477 million.