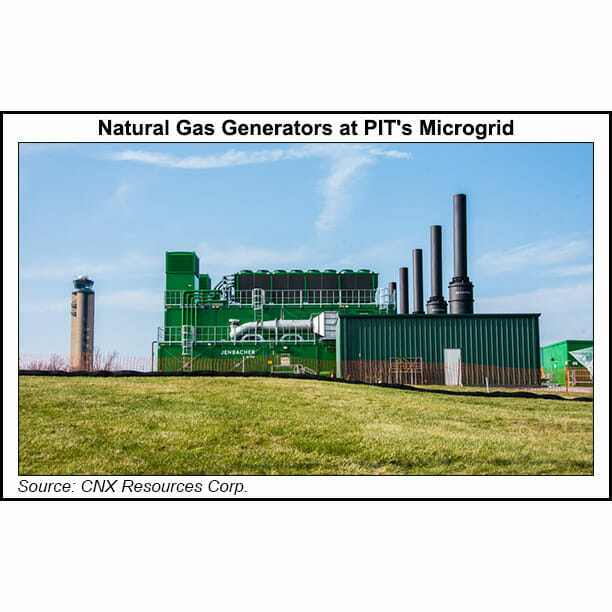 PIT and CNX earlier this month launched another phase of their public-private partnership. It currently includes a revenue-sharing deal for CNX-operated Marcellus Shale wells on airport property and a 20-MW natural gas-solar microgrid that supplies all of the airport’s electricity.

“In a nutshell, it’s a technology that leverages the ultra-high pressure of a Utica well and uses that pressure to create LNG and CNG and electricity,” CNX’s Yemi Akinkugbe, chief excellence officer, told NGI.

He said the technology could be deployed at the wellsite to create the derivative product, LNG or CNG, as well as “generate electricity that could be the feedstock for a future maturation of hydrogen.”

Citing intellectual property issues, the company disclosed few other specifics about the technology.

Akinkugbe said CNX’s technology deployment at PIT could highlight the potential role for natural gas in helping the aviation industry to decarbonize.

“LNG is improving as a potential aviation fuel going forward,” Akinkugbe said. “The key is getting the industry to embrace LNG as a sustainable aviation fuel. We’re saying this is an alternative that has a low cost, a much lower emissions signature, and also benefits the region.”

“We’ve already been moving in this direction,” she said. “Last year we became the first airport in the world to be completely powered by a microgrid powered by natural gas and solar energy.”

Besides LNG, CNG could be used for airport ground transportation and hydrogen could ultimately be used to fuel planes as well as ground vehicles, Akinkugbe said.

CNX and PIT, whose partnership began nine years ago with the airport authority signing a deal with then-Consol Energy Inc., also envision creating a “sustainable fuel hub at PIT” with LNG and CNG fueling depots for airlines, transit, cargo, fleet, military, and other purposes.

“Natural gas and derivative products provide a path for the transportation industry both to reduce carbon emissions in the short term while working toward a goal of net-zero in the long term as hydrogen and other potential solutions mature,” said Cassotis.

She called the Utica deal with CNX “a massive opportunity to both lead the way on a transformational fuel strategy to reduce carbon emissions while cementing Pittsburgh’s role as an innovative world leader.”

Although PIT sits atop multiple natural gas fields, Akinkugbe said the technology could be used to produce derivatives at other airports without an underground natural gas bounty.

CNX said the partnership has generated nearly $105 million in lease and royalty revenues for the airport within the past decade.

“These funds are used to lower airline rates and charges as well as for capital projects,” Cassotis said.

By 2030, CNX projects another $24 million in royalties to PIT from existing Marcellus operations and an additional $27 million from the Utica deal.

The Utica “deal is an opportunity to make a global impact on reducing emissions now through LNG and CNG as we work toward a solution with hydrogen,” said Cassotis.

Akinkugbe told NGI the technology is currently being “fine-tuned” but could begin operations sometime in the 2023-2024 time frame.