CNX Resources Corp. took a big loss on its hedge book during the third quarter, but management defended its strategy and pointed to consistent returns for shareholders during the period when other results surpassed expectations. 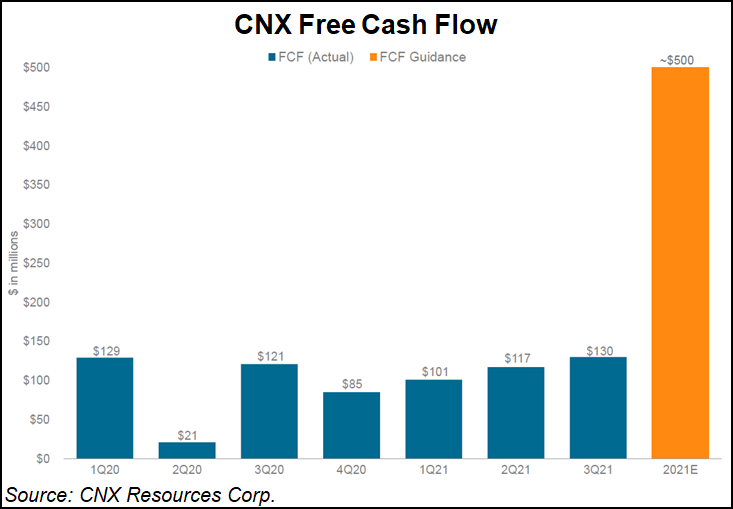 The company reported a $1.5 billion loss on derivatives. Its projections also show it losing more in the months ahead as the weighted average prices of the volumes it currently has hedged through next year are well below the forward market.

Appalachian producers have been hit hard by their hedging this year, as some failed to anticipate the sharp jump in prices. EQT Corp. reported a $3.3 billion loss on derivatives for the third quarter.

“We fundamentally believe that natural gas prices are impossible to consistently predict. You might guess right every once in a while, but not each and every year for decades,” said CFO Don Rush. “So, we believe in the long run, you will catch any gas price upside in the forward markets…and will still protect the downside.”

Rush went a step further to say that “we view our hedging philosophy” as the “right way” to mitigate risk, “meaning that our free cash flow (FCF) and capital investments are protected.” He pointed out that a seven-year plan the company unveiled early last year to generate more than $3 billion in FCF is no longer current because strip prices were so low at the time.

CNX generated FCF of $130 million during the third quarter, the seventh consecutive period of positive FCF. The company allocated 60% of that total to share buybacks and used the remainder to cut debt. CNX is now guiding for $500 million of FCF this year, up from its previous estimate of $475 million.

The company produced 1.7 Bcfe/d during the quarter, up from 1.3 Bcfe/d in the year-ago period, and well above Wall Street’s expectations.

“All the credit goes to the team out in the field,” said COO Chad Griffith during a call to discuss third quarter results. “The consistent plan that we’ve been talking about for a number of quarters now, the consistent goal posts that we’ve given to the team, just allows guys to plan ahead, plan further in the future and continue to execute at an extremely high level that allows continual gains and efficiency, and continual reduction in downtime.”

As a result, the company has increased its production guidance range by 20 Bcfe at the midpoint to 570-580 Bcfe. The capital expenditures forecast was raised slightly at the low-end of the range, but CNX is still guiding for capex of up to $470 million. The bump came as CNX confronted inflationary pressure, with costs up for materials, labor and oilfield services, among other things.

However, management said the increases are likely to have minimal impacts on the company’s margins going forward as it is benefiting from the commodity price rally. For example, CNX reported an average realized price of $3.61/Mcfe in the third quarter, up sharply from the $1.51/Mcfe it reported at the same time last year.