CNX Resources Corp. announced Friday that it would assume full ownership of Cone Midstream Partners LP after entering an agreement with Noble Energy Inc. to acquire its remaining interest in the system for $305 million in cash. 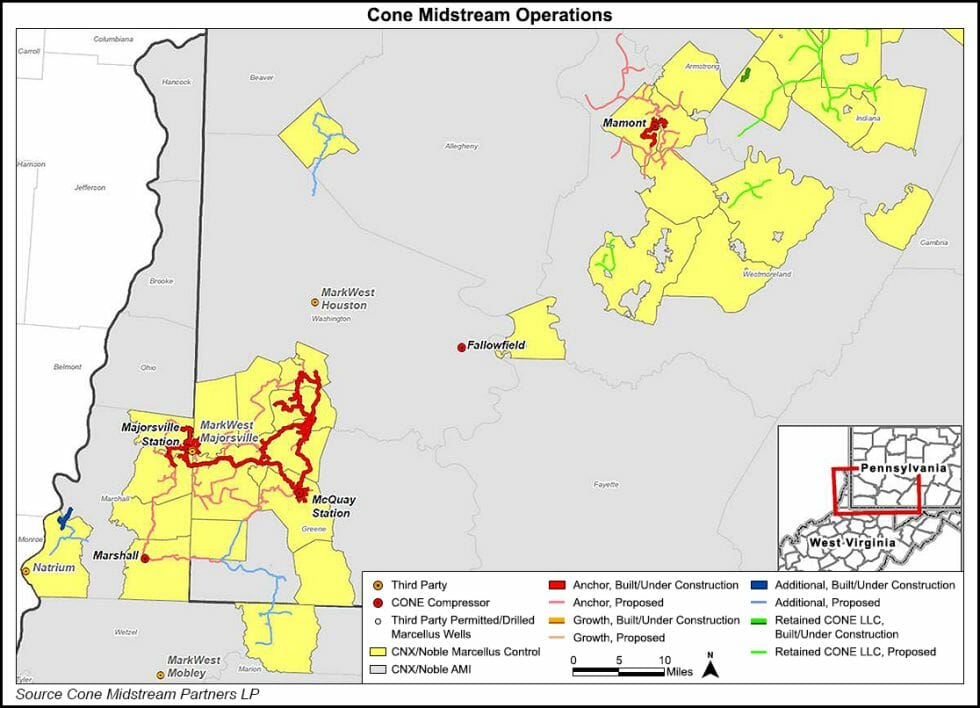 Noble agreed earlier this year to sell its stake to an affiliate of Quantum Energy Partners, Wheeling Creek Midstream LLC, but the company said it reached an agreement this month to negotiate the sale to CNX. Noble has terminated the deal with Wheeling Creek.

“This transaction is expected to create significant value for both CNX and Cone,” CEO Nicholas Deluliis said. “As a the single sponsor of Cone, CNX will benefit from increased flexibility with respect to the scope and timing of midstream development, which will enhance the value of existing development and create future opportunities such as future dropdowns and gathering more CNX volumes, including dry Utica.”

Cone Midstream was formed in 2014 by Noble and CNX, formerly Consol Energy Inc., to gather production from their 50/50 joint venture (JV) acreage in Pennsylvania and West Virginia. The MLP operates about 250 miles of pipeline and 91,000 hp of compression.

Noble, whose U.S. onshore focus is now in Texas and Colorado, struck a deal with Wheeling Creek in May to sell its interests in the system after it dissolved the JV and sold 385,000 net acres in Pennsylvania and West Virginia to a Quantum portfolio company.

CNX said it wanted to dissolve the JV to gain more control over its development pace after splitting the coal and natural gas businesses, which was finalized last month.