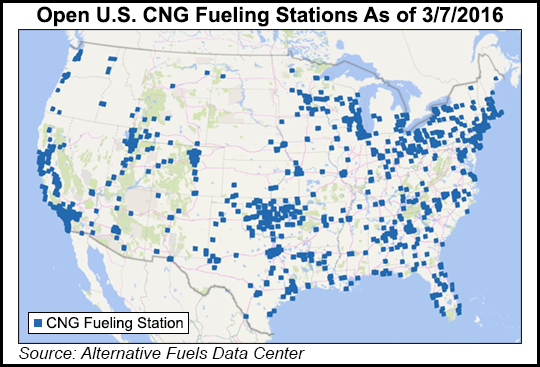 As part of the deal, Clean Energy will rebuild a large CNG fueling station, along with additional garage modifications for NJ Transit, and perform repair/maintenance work through 2020.

Clean Energy also recently signed a five-year agreement to fuel 16 CNG buses operated by SP+ at a new Consolidated Rent-A-Car facility at San Diego International Airport. Operated by the airport authority, the vehicles are expected to consume 27,000 GGE of CNG.

In February, the Los Angeles County Metropolitan Transit Authority opened a private, $6 million CNG fueling facility that Clean Energy built and will maintain under a 10-year contract to fuel 175 CNG buses. Other transit deals included an extension of a contract with the City of Santa Cruz, Los Angeles World Airports and the City of Long Beach, CA.

Separately, the renewed push for renewable natural gas (RNG) in transportation was the focus of a “Game Changer NGV Summit” the last week of February in Long Beach. It was hosted by NGVAmerica, the California Natural Gas Vehicle (NGV) Coalition and the California NGV Partnership. Organizations from 25 states and Canada attended.

The focus was on upcoming natural gas engine advances and particularly the combination of the new engines with near-zero emissions and expansion in the use of RNG.

Rob Neitzke, president of Cummins Westport (CW), told the gathering that the first of CW’s near-zero versions of the 8.9-liter ISLG engine will begin production in April. A similar version of the 11.9-liter ISX12 G engines will be available in near-zero (NZ) emission form starting in 2018, he said. Also planned are CW NZ engines in the 6.7, 8.9, and 11.9-liter sizes.

Participants talked up the need for NGVs to help states meet tougher national ambient air quality standards that take effect in 2023. Natural gas provides the chance for on-road heavy-duty vehicles to provide what the NGV sector says will be dramatic reductions in emissions of smog precursors and climate-changing greenhouse gas emissions.

In Canada, Greenlane Biogas is supplying the biogas-to-biomethane upgrading system and a carbon dioxide recovery unit in Orgaworld Canada’s organic biofuel facility to be operated by the City of Surrey, a southeast Vancouver, BC, suburb. The facility is under construction.

The facility will be capable of processing 115,000 tons of organic waste annually from the city’s curbside collection program and commercial waste from the overall region. Biogas will be made from anaerobic digestion and upgraded to RNG to fuel the city’s waste collection and operations of service fleet vehicles.

Surrey has a CNG fueling facility that is owned by the local FortisBC utility and operated by Progressive Waste Solutions supporting 110 Progressive CNG trucks.

Agility is marketing its 160-DGE unit as “the most efficient package of any CNG heavy duty vehicle system on the road today.” It is touted as compact, durable and safe, offering up to 13% faster vehicle fills for fleet operators.

On a larger scale, Quantum Fuel Systems last month inked an $8.4 million deal with Boston-based Xpress Natural Gas (XNG), a supplier of bulk loads of CNG to large customers with no access to pipeline service (see Daily GPI, Sept. 8, 2015; Dec. 31, 2013). In the second half of this year, Quantum will supply 15 new Q-VP650 trailers, each with 51 vertically mounted Type IV fuel-carrying cylinders to transport collectively 650,000 standard cf of gas at 5,000 psi.

Quantum said it has the option to provide another $13 million of these CNG fuel-hauling trailers. XNG CEO John Nahill said the new trailers’ engineering design and high capacity storage will allow his company to improve its transportation services in serving markets not reached by traditional gas pipelines in the far Northwest and Northeast regions of the country.

Meanwhile in the heart of the natural gas production and use, Texas, the NGV count in the state rose to 9,000 at the end of last year from 7,100 at the end of 2014, according to the Texas Natural Gas Foundation (TXNG). “Texas fleet managers continue to recognize the importance of diversifying their fuel sources to cut costs,” said Jason Isaac, TXNG president.

There are now 86 private and 64 public locations for fueling NGVs in the state, a 44% increase from 104 outlets in the state in August 2014, TXNG statistics indicate. And 41 additional stations are set to open this year in Texas.