In the first two weeks of August the fueling structure for compressed natural gas (CNG) vehicles continued to expand in places like Sacramento, CA, Edmond, OK, Pontoon Beach, IL, and DuBois, PA. In Sacramento, a $1.9 million CNG station was opened to support county refuse trucks and what local officials called “an increasing number of other NGVs.” 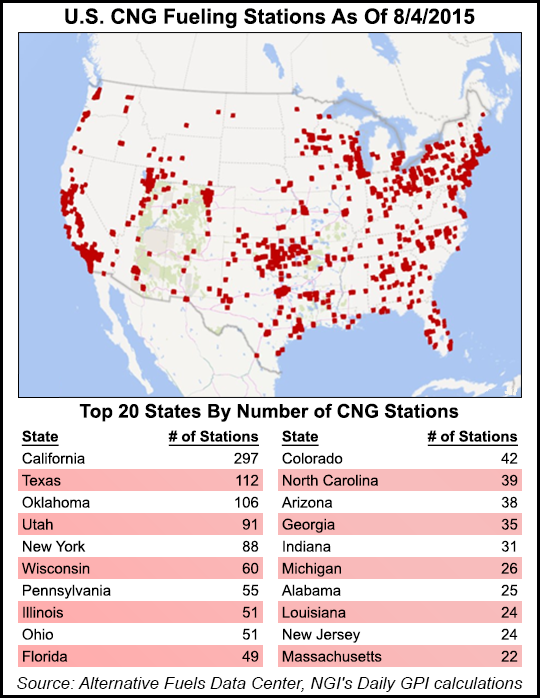 Officials at the Sacramento County Waste Management and Recycling Department are hoping the new CNG station, with both time-fill and fast-fill capabilities, will “wean” its fleet from liquefied natural gas (LNG) and two truck dispatch facilities having to depend on one LNG fueling spot. The CNG station will allow the county fleet to stop having to truck in mobile supplies of LNG for one of its two truck yards.

TruStar Energy developed the new facility for the county. “While the county doesn’t currently have a lot of CNG-powered fleet vehicles, it will be aggressively seeking new NGVs now that the station is online,” said a TruStar spokesperson.

In Oklahoma, two OnCue Express CNG fueling stations opened, and the company promised to open two more in the state before the end of the year. The stations were developed by ANGI Energy and both are located to the north of Oklahoma City in Edmond and Hennessey.

The one in Edmond is a single dispenser with two hoses. Hennessey is larger with four heavy-duty and two light-duty truck lanes. The site also has a large turning radius, so it can accommodate semis and “any other type of CNG vehicle,” said Scott Minton, the OnCue CNG market development manager.

OnCue Express is the largest retail supplier of CNG in Oklahoma, and the two other facilities coming this year will be in Oklahoma City and in an OnCue Express truck stop on Interstate Highway 35 at the Billings exit in the northern part of the state.

In Pontoon Beach in southern Illinois northeast of St. Louis, Clark Power Services, a service provider for all sizes and types of fleets from over-the-road long haul to local pickup/deliver and regional, announced it was relocating its service center and adding equipment to handle NGVs. While moving to have easier access to Interstate 270. Clarke officials said the NGVs are a growth part of its business so the new facilities make sense.

In Pennsylvania, Wisconsin-based U.S. Gain, the CNG division of U.S. Venture Inc., opened a CNG station in DuBois, PA, in partnership with “O” Ring CNG Fuel Systems LP. It will be co-branded and will be part of the U.S.Gain Clean Fuel nationwide network of CNG stations.

U.S. Gain touts its CNG stations as being located along major shipping corridors, and it has a goal of opening 100 fueling stations nationwide within the next two years.

In the Pacific Northwest and western Canada, fleet operators are expanding their NGVs. The city of Spokane, WA, launched its first CNG garbage trucks with plans over the next seven years to convert all of its 90 garbage trucks to run on CNG, replacing diesel use. It is starting with four Peterbilt CNG refuse trucks and plans to have a total of 20 by the end of this year.

Spokane is installing CNG time-fill capability at a new central service center for combined solid waste management and fleet maintenance vehicles. A local architect and construction company were the design-build team with California-based Clean Energy Fuels as a subcontractor.

Across the border in British Columbia, Vedder Transport has added to its 50 LNG trucks with 15 additional ones acquired from Bison Transport in Alberta. Vedder said a dairy it hauls for offered expanded business to the fleet operator on the condition that it expand its use of NGVs. The additional LNG trucks are all Peterbilt tractors.

In a renewed effort to use flared gas, a Massachusetts company making natural gas vehicle (NGV) conversion kits on Thursday bought a California company’s Bakken-based natural gas liquid (NGL) processing technology, which it plans to use to fuel trucks and rigs working in the North Dakota oilfields.

“Capturing flared gas from remote and stranded wellsites is a growing regulatory necessity,” said an APG spokesperson, emphasizing that Trident’s approach is a proven mobile NGL technology with a track record in the Bakken region.

APG signed a license agreement with Trident gaining the exclusive worldwide rights to commercialize its proprietary NGL technology, and in addition, it bought “substantially all” of Trident’s operating assets, including two existing mobile NGL operating systems, which are currently serving remote or stranded wellsites for one of the top five exploration/production companies in the Bakken.

The company also has plans and a $3.25 million verbal commitment from several shareholders and board members to build two additional NGL operating systems, it said.

These additional systems “will include the first NGL system with the capability to convert the unconventional Bakken flared gas into a premium quality natural gas for all local APG dual-fuel stationary and NGV applications,” the spokesperson said.

“We are very comfortable moving into this new vertically integrated space given the fact that approximately 85% of APG’s North American duel-fuel oil rig conversions are currently operating on conditioned wellhead gas,” said APG CEO Lyle Jensen. He said there is “a very addressable market” of thousands of heavy-duty trucks supporting the oil/gas production activity in North Dakota.

In another part of the greenhouse gas (GHG) emissions efforts, the National Highway Traffic Safety Administration (NHTSA) and U.S. Environmental Protection Agency (EPA) have scheduled a public hearing Tuesday (Aug. 18) in Long Beach, CA, to gain feedback on the second phase of the proposed national fuel efficiency and GHG standards for medium- and heavy-duty trucks. Alternative fuel advocates contend that the higher standards will be a key to more fuel savings by fleet operators.

As a group, the medium- and heavy-duty trucks form the transportation sector’s largest contributor to GHG emissions. Proposed Phase II standards would apply to vehicles, tractor-trucks, trailers and engines manufactured in the model years 2021 to 2027.

CalStart, a national nonprofit clean transportation technology advocate, said it will unveil a new report looking at the economics of the proposed new standards and the fleet operators’ attitudes and opinions on the new requirements.