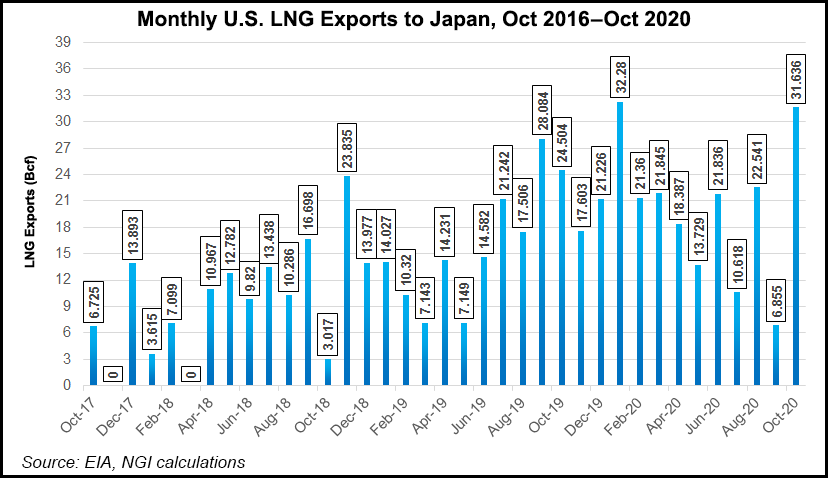 While the electricity contracts would expand CME’s suite of global power futures and options, the two LNG contracts could provide Japanese power producers another tool to manage price risk, the exchange said.

“The launch of the two new yen-denominated LNG contracts will be relevant for market participants who want to trade the spread between LNG and electricity futures,” said CME’s Izumi Kazuhara, who oversees operations in Japan.

The LNG contracts available for trading on CME Globex include the Japan Korea Marker and Japan Crude Cocktail, which is based on the average price of nine custom-cleared crude oils reported by Japan’s government. Both are financially settled futures.

The contracts are financially settled in Japanese yen using the arithmetic average of the 30-minute spot market day-ahead prices published by the Japan Wholesale Power Exchange. They’re published for the Tokyo and Kansai regions based on both base and peak loads over the period defined by the contract. The electricity contracts would also be available on CME Globex.

This week’s announcement comes as LNG prices in northern Asia have hit record highs amid a cold snap and supply crunch that’s left buyers scrambling for supplies. In Japan, where combined-cycle gas turbines entirely dependent on LNG represent a significant portion of power supply, electricity prices have skyrocketed. Manufacturers in the Tokyo and Kansai regions with private power supplies have been asked by the grid operator to sell into the spot market to avoid blackouts.