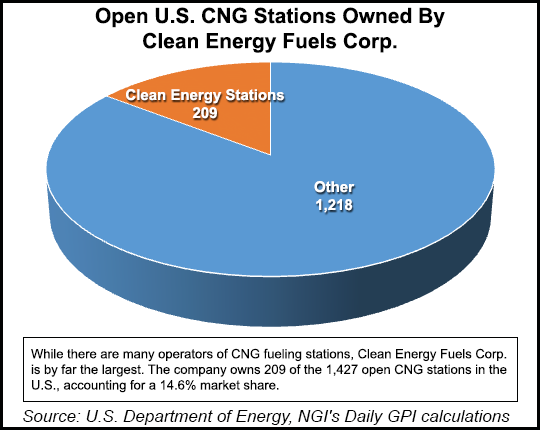 The announcement was made Tuesday at the American Trucking Association Management Conference in San Diego, where Clean Energy said it would provide Dillon with 2.5 million additional diesel gasoline equivalents of CNG annually, and would open fueling stations in Houston, Midland, TX, and West Atlanta, GA.

Clean Energy said the agreement would help support Dillon’s push to lead the heavy-duty CNG-fueled trucking sector and allow Dillon to increase the number of CNG trucks to 200 in its 500-truck fleet.

Dillon is to use an expanded network of public-access fueling in both Texas and Georgia, including a station that Clean Energy built and operates on Dillon’s property in Dallas.

“The successful operation of our Dallas Clean Energy station and our current natural gas fleet operations have proven a lower total cost-per-mile than our diesel fleet,” said Dillon Transport President Jeff Dillon. The rest of its fleet is to be converted to CNG with Clean Energy as its preferred fuel provider, he said.

The Midland station is adjacent to a Pilot Flying J Travel Center and is to feature two CNG lanes and two liquefied natural gas lanes. The Houston and West Atlanta stations would each have two CNG lanes.

Clean Energy has an agreement with Pilot-Flying J to build, own and operate fueling facilities (see Daily GPI, Aug. 25, 2011). Pilot has more than 550 locations in 47 states.