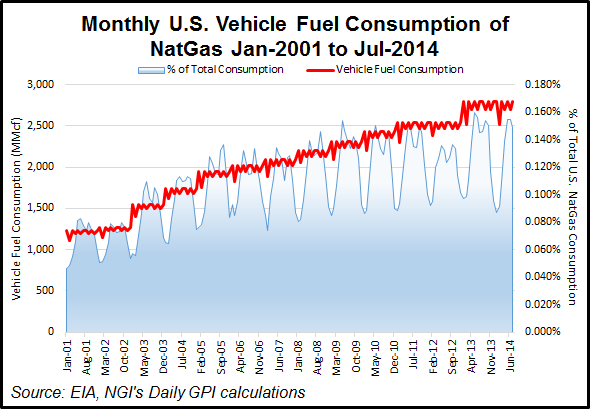 As part of a $37.6 million common unit purchase agreement, Clean Energy said it is getting a controlling interest in three-year-old NG, and ownership of its CNG station in Milton, VT, one of two that Clean Energy developed and operates for NG (see Daily GPI, July 16).

NG co-founder and CEO Ted Evslin will stay with the company as CEO. He is the company’s second largest investor, according to Clean Energy. The company will remain based in Milton.

“The key takeaway is that the majority of the investment will be used to fund the future growth of the business,” a Clean Energy spokesperson told NGI on Wednesday.

In an 8K filing to the Securities and Exchange Commission, Clean Energy said NG is to use the proceeds from the unit sale primarily for “working capital purposes, including funding capital expenditures and the expansion and growth of its business.”

The Milton compression station, which serves the NG fleet of CNG delivery trucks that supply to customers off the pipeline grid in New England, will supply nearly 16 million gasoline-gallon-equivalents (GGE) of CNG annually. It immediately becomes Clean Energy’s highest-volume station among the 500 stations it maintains in its current national network.

Clean Energy is coming off a record-breaking third quarter in which it delivered 50.6 million GGEs; however, financially it is still struggling to make a profit..

Clean Energy CEO Andrew Littlefair called the latest purchase an example of his company’s focus on “aggressively pursuing market opportunities” that will lift its natural gas sales. “The company plans to grow its CNG sales further with a strategic move to expand its CNG market to large industrial and institutional energy users beyond the nation’s pipelines.”

Evslin said rising and unpredictable fuel costs have made it hard for manufacturers and facilities without access to a natural gas pipeline network to compete. “NG Advantage is forging a new industry that meets this need,” he said.