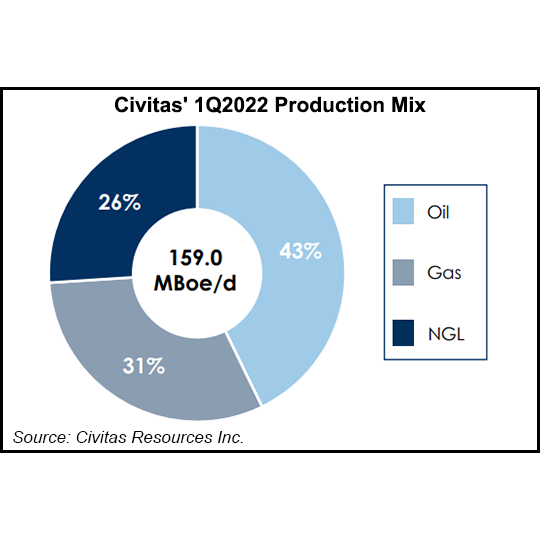 Civitas has filed two oil and gas development plan (OGDP) locations with the Colorado Oil and Gas Conservation Commission (COGCC). A hearing date is “set in the near future that we expect to be approved unanimously.” Chairman Ben Dell said.

Owens said the company is “working right now on 12 other OGDPs internally. We have submitted six of those also to the state and that includes just over 100 wells.” Two are in technical review, slated for a final hearing in June.

“The other four are in completeness review and those include another 75 wells,” Owens said. “And then we have about another six that we’re working internally for another 100 wells…So, over the next several months, we plan to have…about 220 wells, submitted and hopefully approvals rolling through on various OGDPs that we’re working on…”

“Our 2022 plan is almost 100% permitted at this point, with the only remaining unpermitted pad scheduled to be spud in the fourth quarter,” Dell said. In 2023, the company’s drilling plans “will largely be permitted once we receive approval” for the comprehensive area plan (CAP).

A CAP would address cumulative impacts and has to be submitted to COGCC. Civitas expects to receive approval for the outstanding CAP in the third quarter, Dell said

Owens noted that it “should be, we anticipate, the first CAP approved under the new rules in the state.”

Broad regulatory changes, including an updated mandate for COGCC, took effect in 2021.