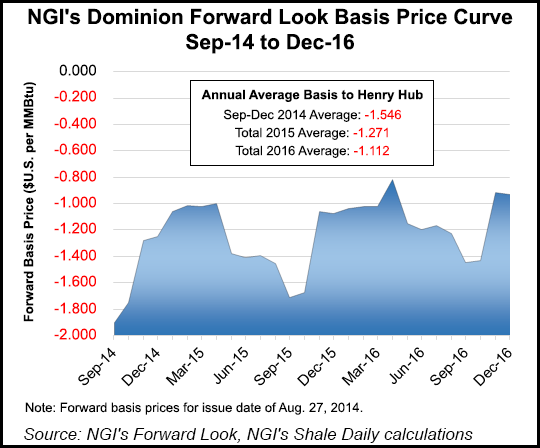 Financial analysts had expected the Appalachian pure-play to increase its guidance, as production skyrocketed through the first half of this year. In July, Antero announced a milestone when gas production surpassed 1 Bcfe/d and reported a 94% year-over-year increase with 891 MMcfe/d (see Shale Daily, Aug. 8; July 18).

The company has been targeting volume growth of 75-85%, with previous plans to exit the year at 925-975 MMcfe. However, Antero now is aiming for output to grow 990 MMcfe/d to 1.01 Bcfe/d. At the same time, the company is increasing the average rig count in the Utica and Marcellus shales from 20 to 22 and accelerating development across its rich-gas assets in Ohio and West Virginia, with longer laterals, shorter stage lengths (SSL) and more land, pushing its capital spending from $2.8 billion to $3.7 billion.

Financial analysts expected a larger bump in guidance and appeared pessimistic over the increase in spending versus pay-off.

“We would characterize the press release as mixed and expect there will be Street concerns regarding the magnitude of the capex increase, which more than offsets the production guidance increase,” wrote Wells Fargo Securities analyst David Tameron in a note to clients.

Although Antero has been one of the Appalachian Basin’s most active operators, with the kind of quarterly production increases that have continually turned heads, it has not been insulated from widening Northeast basis differentials. Since going public last year, management has appeared especially focused on building a processing and midstream portfolio to handle rising volumes (see Daily GPI, Oct. 11, 2013). It has announced several deals to anchor major pipeline projects and further expose the company to advantageous pricing points.

But Antero cited widening basis at Texas Eastern Transmission, or Tetco M2 and Dominion South Point in a decision to delay its planned dry gas test in Tyler County, WV until next year (see Shale Daily, May 16). The company said it does not currently have access to premium Appalachian, Midwest or Gulf Coast markets for gas in the northwest part of the state.

Excluding hedges announced in 1Q2014, Antero’s average realized gas price was $4.49/Mcf, up 3% from the year-ago period when it earned $4.37/Mcf, but still an 18-cent negative differential from the average New York Mercantile Exchange price.

Ceteris paribus, it may be wise for Antero to wait until next year, according to NGI Markets Analyst Nathan Harrison. Dominion basis is expected to average at minus-$1.546 to the Henry Hub for the remainder of 2014, but is forecast to average minus-$1.271 for all of 2015, Harrison said. While things may be getting slightly better at Dominion in 2015, the natural gas forward markets aren’t anticipating prices at Dominion to reach parity with the Henry Hub for the foreseeable (tradeable) future. According to NGI‘s Forward Look, gas at Dominion will average a discount of 89.6 cents all the way to December 2023.

While depressed prices contributed to a second quarter loss for the company, Antero has received a boost from its liquids production, which increased 387% year-over-year last quarter. The company said it would focus strongly on its wet-gas windows with two additional rigs and optimization techniques. Its capex is increasing in large part due to longer laterals and SSL completions, which Antero recently said cost 10-20% more than wells completed without them, but improve results by 20-30%

Analysts were more optimistic about Antero’s early plans for 2015 and 2016, which call for average production to increase from 1.4 Bcfe/d to 1.5 Bcfe/d and from 2.1 Bcfe/d to 2.2 Bcfe/d respectively.