U.S. independent Cimarex Energy Co. has agreed to sell some of its Midcontinent properties, including a pair of natural gas gathering and processing facilities, to privately held BCE-Mach III LLC for an undisclosed amount. 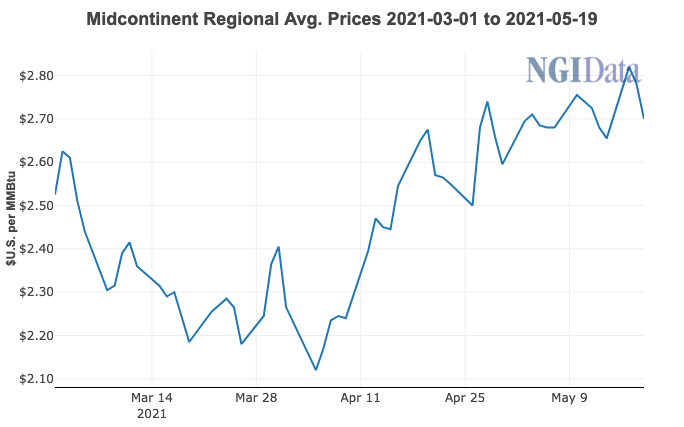 Under the recently signed purchase and sale agreement, the partnership of Houston-based Bayou City Energy Management LLC and Mach Resources LLC would acquire producing properties in western and southern Oklahoma, as well as the Texas Panhandle. The processing facilities are in southern Oklahoma, BCE-Mach III said.

“We continue to have success adding to our holdings in the Midcontinent region,” said Mach CEO Tom Ward, who co-founded Chesapeake Energy Corp. and SandRidge Energy Inc. “As a result of our scale in the area across our platforms, we are able to bolt on an acquisition of this size with minimal incremental overhead costs. In conjunction with our team’s expertise in the region and strong financial standing, we expect to extend our acquisition successes.”

Cimarex did not mention BCE-Mach III in its first quarter 2021 earnings report earlier this month. However, it said it had agreements totalling $115 million to sell assets in the Permian Basin and Midcontinent. Together, the divestitures included more than 3,000 gross wells that were  producing about 900 b/d.

Cimarex said the asset sales would decrease its production expense with “minimal impact” to full-year 2021 volumes. The deal is expected to close in June.

The Denver-based independent is currently running five rigs in the Permian. It is running one in the Midcontinent and plans to release it at the end of the month. However, CEO Tom Jorden said Cimarex remains optimistic about its prospects in the Midcontinent.

“We really see the Midcontinent as a sustaining, ongoing part of our portfolio,” Jorden said. “We like the geographic diversity. We like commodity diversity. We like the market diversity.” He added that the company is wrapping up a “seminal test of some new ideas” in the region and plans to wait on flowback results before deciding how to proceed once it is finished.

“Don’t misinterpret rig count for enthusiasm,” the CEO said on the earnings call.

For its part, BCE-Mach III plans to “prudently develop” its assets with a goal of generating free cash flow, Bayou City Energy managing partner Will McMullen said. He added that the company should exceed $200 million after accounting for all capital expenditures, general and administrative and debt interest expenses.

McMullen indicated BCE-Mach III may expand to other basins as well. “We will also evaluate applying this strategy to other basins where assets are either nonstrategic to a seller or owned by unnatural holders.”

The BCE-Mach III partnership was formed in early 2020 and has since amassed an Anadarko Basin position that spans more than 700,000 net acres across 46 counties in Oklahoma, Kansas and Texas. It holds an interest in more than 7200 producing wells with net production of 48,000 boe/d, half of which is liquids.

BCE-Mach III’s most famous deal to date is its acquisition of Alta Mesa Resources Inc. in April 2020 for $320 million after the company filed for Chapter 11 bankruptcy protection the previous September.A previous form of the partnership also acquired a package of Mississippi Lime assets from SandRidge in 2018.