Cimarex Energy Co. has agreed to sell more than 98% of its projected natural gas production in the Permian Basin through October 2019, on concerns that operators will continue to be impacted by increased local price differentials until additional pipeline capacity is brought online. 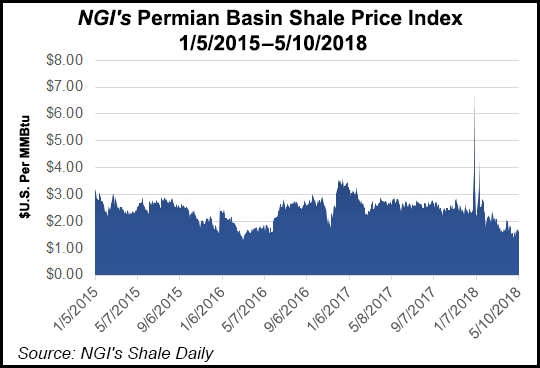 “Fortunately with our Triple Crown and our Matterhorn systems in place, we have access to multiple markets, which certainly works in our favor,” COO Joe Albi said during an earnings call Wednesday to discuss 1Q2018 results. “Our focus has been surety of flow, making sure the product gets sold. We sell our residue gas either as gas that we’ve taken in kind on the tailgate of a processing plant, or directly to the purchaser at the tailgate of the processing plant.

“For gas that we can take in kind, we either sell directly to utilities, local distribution companies or end users who have demand and firm transport for that gas,” Albi said. He added that another option is to use “counterparties that either have firm transport out or are purchaser-backed with purchasers who have firm [transport] in their hip pocket to get the gas out of the basin.

“Our goal was to sell to parties that have firm to get the gas out of the basin. We took a look at our projected production profiles, not only of our base wells, but for our 2018 and 2019 drilling programs. We looked at what potential revenue could be either under recovery or rejection off each one of those processing facilities, and we put our forecasted volumes in place that our marketing team was able to line up with purchasers.”

In the Permian, the company said it completed nine wells targeting the Wolfcamp and Bone Spring formations and the Avalon Shale during 1Q2018. Of note were two wells targeting the Avalon in Lea County, NM, the Coriander AOC 1-12 State 1H, and the Thyme APY FED 19H. The Coriander averaged peak 30-day initial production rates of 3,333 boe/d (2,233 b/d of oil), while the Thyme averaged 2,059 boe/d (1,420 b/d), respectively.