U.S. independents Cimarex Energy Co. and Cabot Oil & Gas Corp. have completed their closely watched merger, bringing together more than 700,000 net acres across the Marcellus Shale and the Permian and Anadarko Basins. 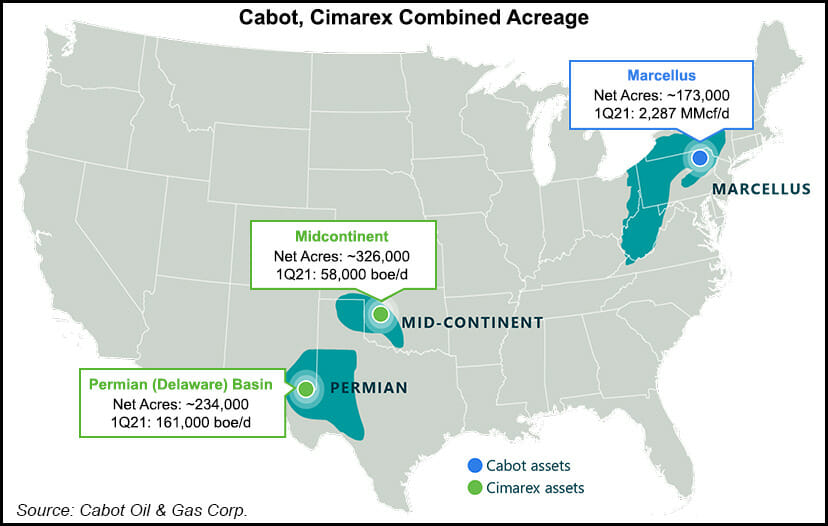 The previously announced transaction was completed on Friday after both companies’ shareholders approved it earlier this week. The combined company operates under the moniker Coterra Energy Inc., which will trade on the New York Stock Exchange under the ticker symbol “CTRA” starting Monday (Oct. 4). The assets combined produced 605,000 boe/d as of 2Q2021.

“Today marks the beginning of our journey as one Coterra team,” said former Cimarex CEO Tom Jorden, who continues in that role at Coterra. “With tremendous flexibility between premier oil and natural gas assets and a focus on operating efficiently, driving substantial cash flows and generating capital returns through commodity cycles, Coterra is poised to deliver enhanced value to our shareholders.”

Management added that its mix of oil and gas assets in different basins would help it navigate commodity cycles. Jorden has previously said the combined entity could generate $4.7 billion in free cash flow (FCF)  from 2022-2024, which would represent more than one-third of its market capitalization. The FCF outlook is assuming average prices of $55/bbl West Texas Intermediate oil and $2.75/Mcf Henry Hub natural gas.

Coterra Executive Chairman Dan Dinges, who was previously Cabot’s CEO, said the launch of the new company would build upon both teams’ strengths.

“Driven by a commitment to operating accountably, sustainably and safely, Coterra will be well positioned to increase returns to shareholders and deliver long-term value for all our stakeholders,” Dinges said.

The all-stock merger announced in May reflects a combined enterprise value of $17 billion.

The combined team has promised to deliver on four major objectives to improve shareholder value: generate more cash, leverage its oil and gas assets, improve its balance sheet, and strengthen its environmental, social and governance commitments.

Coterra’s directors also include Jorden and Dinges, and a mix of former members from both the Cabot and Cimarex boards.