Chord Energy Corp. executives, in an inaugural earnings call after emerging from the merger of two key Bakken Shale players, said the firm’s core assets beat production expectations during the second quarter of 2022 and helped set a course for the new company. 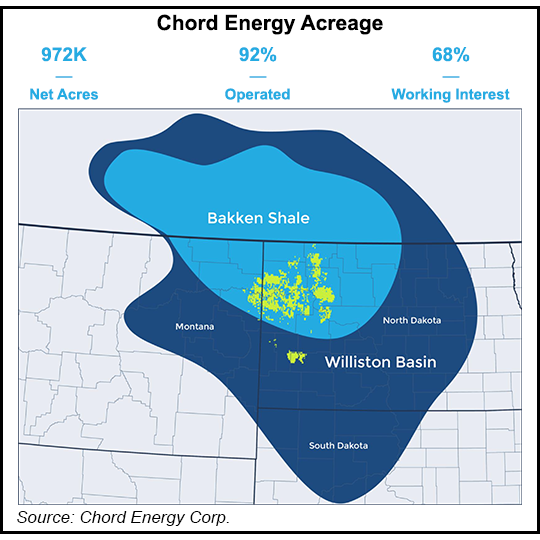 Chord was formed by the merger of independents Whiting Petroleum Corp. and Oasis Petroleum Inc., which officially closed at the beginning of July. The new entity now holds the mostly oil-producing assets of both firms in the Bakken and Williston Basin. Its footprint consists of operational control or working interest in around 972,000 acres in Montana and North Dakota.

CEO Danny Brown, former CEO of Oasis, told investors that Chord’s primary focus for the near term would look a lot like the strategies of its predecessors: hone in on its core assets in the Bakken and turn cost-savings into investor returns. However, he said, that doesn’t mean the firm would be a carbon copy of either Whiting or Oasis.

“We’re having our leaders and teams keep an open mind and determine the best way to do things going forward without any bias towards the way things were traditionally done at either predecessor company,” Brown said.

Chord’s combined average production for 2Q2022 was reported at 75,613 Boe/d, compared with combined production from Oasis in the year-prior period of 64,040 Boe/d.

Brown told investors the firm expected impacts from severe weather in North Dakota during the beginning of the quarter would hinder production. However, he said, performance “was stronger than originally expected.” Costs also came in lower than anticipated, but Brown said expenditures could catch back up since some of its activities were pushed later in the year.

During the quarter, the firm also brought online what Brown called “the Bakken’s first” dual-fuel frac fleet that Chord plans to use in order to lower its emissions profile. The firm anticipated running three rigs and one-and-a half crews in five of its near-term focus areas.

While Chord’s lease operating expense increased slightly compared to that of Oasis alone, Brown said the new firm’s expanded team was already proving effective at beating back inflationary pressures with its larger scale.

“The increased scale of the company will allow us to level load our program, including keeping a pressure pumping crew working full-time, which should lead to greater operational efficiency and therefore lower cost than we would experience otherwise,” Brown said.

Both Oasis and Whiting emerged from Chapter 11 bankruptcy in 2020 after corporate restructurings.

The firm also announced a coming share repurchase program of $300 million. In July, it finished repurchasing $125 million in shares.