Drilling activity in China is expected to intensify over the next five years as the nation’s producers are under pressure to boost domestic natural gas and oil production and reduce reliance on imports. 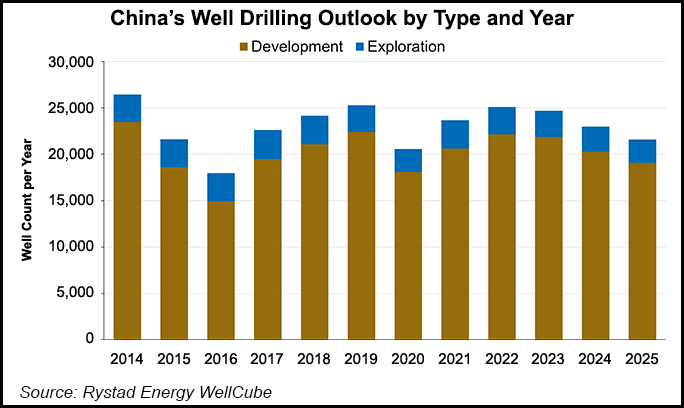 According to a recent report by Rystad Energy, China’s top three national oil companies (NOCs) are expected to spend about $123 billion on drilling and well services from 2021-2025. The investment is projected to yield about 118,000 new wells in China during the period.

“As state-owned entities, China’s major operators are not solely profit-driven,” said Rystad’s Peng Li, energy research analyst. “They also play an important and integrated role in social economics. So even in a less-favorable oil price environment, we expect Chinese NOCs to perform in line with government expectations and to continue to make an effort to shore up domestic supply.”

The findings come as China is currently facing an energy crisis amid skyrocketing natural gas and coal prices. Bloomberg reported Monday that residents in several of the nation’s northern provinces were experiencing blackouts after power had already been curbed to the industrial sector.

As a result, the Chinese government in 2018 called on its NOCs to start raising domestic output levels. The country also has opened up to foreign companies to develop natural gas to increase domestic supplies.

The program has yielded some results. Chinese natural gas output grew from 120 billion cubic meters (Bcm) in 2014 to about 190 Bcm last year. However, Rystad noted that domestic natural gas production “remains modest compared to overall demand,” which amounted to 330 Bcm in 2020.

That means that China still depends on LNG and pipeline imports for more than 40% of its gas needs.  And demand is expected to continue rising in China, especially as the nation looks to replace coal in power generation to reduce emissions. China recently said it would stop building coal plants abroad, a move that is certain to place downward pressure on long-term demand, Wood Mackenzie said last week.

Oil demand will be underpinned by China’s massive transportation sector, Rystad said. Though the government is pushing to electrify transportation, “China is still expected to use oil products to fuel its hundreds of millions of cars, buses and trucks for the next five years at least,” Li said. “Although the country’s electric vehicle market is projected to achieve a 20% market share by 2025, internal combustion engine vehicles are expected to account for most of China’s transport needs and to provide a backbone for oil demand through 2025.”

Exploration and development efforts by China’s NOCs may be starting to bear fruit as a handful of large oil and gas discoveries have been announced in recent months.  Most of those were unconventional resources.

“With China focused on maintaining or increasing production levels, service companies that bring innovative technology solutions to the table are likely to get a warm welcome in the Chinese drilling and well services market in the years to come, whether the field developments are conventional or unconventional, onshore or offshore,” Rystad said.