China’s unconventional natural gas production has undergone significant progress in the past 10 years, increasing to nearly 600 wells and 9 bcm (317.8 Bcf) of production in 2017, and output is likely to double to 17 bcm (600 Bcf) in 2020, according to Wood Mackenzie. 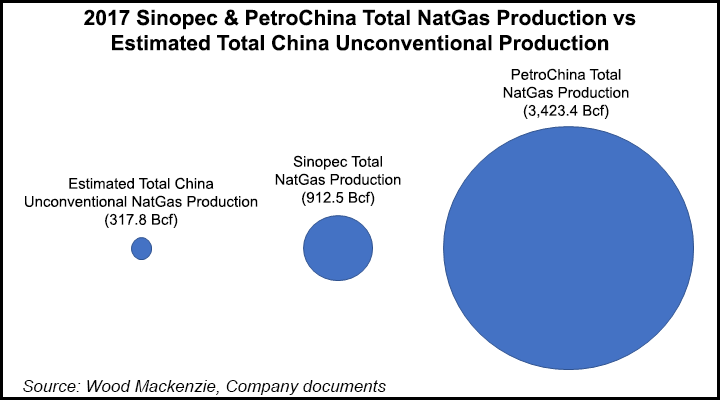 Two state-owned operators, China Petroleum and Chemical Corp., aka Sinopec, and PetroChina Co. Ltd. are drilling unconventional wells in the mountainous area of the Sichuan Basin. Sinopec is drilling wells in the Fuling development, while PetroChina has two projects underway, Changning-Weiyuan and Zhaotong.

“Nearly 700 new wells will come onstream between 2018 and 2020 from the three projects combined, with a total capital investment of $5.5 billion,” said Wood Mackenzie consultants.

However, despite the achievements in domestic tight gas and shale, China still is expected to miss by a considerable margin its 2020 production target of 30 bcm (1,059.32 Bcf).

“China is eager to materialize its shale gas potential to fuel its massive gasification initiative and support rising demand growth,” said consultant Tingyun Yang. “In order to meet the government’s 30 bcm target, up to 725 additional wells are needed by 2020 on top of the nearly 700 new wells.

“This will double the amount of investment needed in the base-case drilling plan. The required well number could be larger if well productivity degrades. This is a mammoth task” for the country’s national oil companies (NOC).

“The speed of shale development will impact global gas markets,” said consultant Lynn-Yuqian Lin. “Considering the impact of shale gas production on domestic demand, the 2020 13 bcm ‘gap’ will have to be filled by imports,” particularly liquefied natural gas (LNG).

“We have already witnessed how China was able to leverage on flexible LNG to cope with record-high demand this recent winter season.”

Yang said the “good news” for unconventional gas development is that well costs “have gone down considerably — 40% for exploration wells compared to 2010 levels, and 25% for commercial wells compared to 2014. Chinese NOCs are starting to get their shale game plan together.”

The United States had more than 30 years to realize the unconventional drilling potential, according to Wood Mackenzie, which took off in the early 2000s.

“Success was built on a combination of underlying factors, including competitive and open markets, active small players, developed infrastructure and easily available expertise. None of these hold true for China.”

Comparing plays and rocks reveals how unique China’s formations are, according to the consulting firm. The country’s shale formations “tend to be deeper, more tectonically fractured and often less-pressured than U.S. plays.”

Deeper depth formations mean deeper wells have to be drilled, which leads to higher costs and more challenges to maintain well integrity. Most of China’s tight gas and shale gas plays are in mountainous terrain, too.

“Selecting viable well sites is not as straightforward as in Texas, where the topography is far flatter,” said consultants. “In China, operators have to first remove mountainous land to host well sites, build their own infrastructure, and transport drilling crews and equipment across vast distances to the well sites. High population density also makes drilling and hydraulic fracturing harder.”

According to a report published last year in ScienceDirect, nine giant gas fields have been successively discovered in the Sichuan Basin with cumulative proven gas reserves of 3.69 tcm (130.3 Tcf). The evaluation by state-owned China National Petroleum Corp. demonstrates “that natural gas resources in the Sichuan Basin takes the first place among those petroliferous basins all over China, but its proved gas reserves is only 10%, so the exploration prospect is bright.”

Big Oil made a move to join the state-owned operators, but all but one have since exited after lackluster results, noted the consultants. According to Wood Mackenzie, BP plc is the only remaining big player, with two undeveloped production sharing contracts.

“The Chinese NOCs, however, have overcome these challenges by developing their own understanding of the unique geology, relying on their own service arms to get more experience and, most importantly, progress in completion techniques and technology,” said consultants.

The NOCs have adopted a pad-based drilling, fracturing and production process to reduce the footprint of the well sites on the mountains. The practice, combined with more indigenous technology and drilling and completion techniques have reduced drilling time and costs, while the wells are becoming larger.

Chinese unconventional drilling costs still are higher than in the United States. For example, Wood Mackenzie estimated well drilling costs are as much as 20% higher compared to a “deeper and larger well” in the Haynesville Shale.

However, a recent turnkey contract for drilling, cementing and completion for four Sichuan wells that was given to Honghua Group “could perhaps hint at a new chapter in Chinese shale,” said consultants. The contract implies an all-in cost at $7-7.5 million/well, which would be another 20% decline in well cost from 2017, once pad construction, infrastructure and facilities costs are included.

“While we do not expect a Chinese shale gas boom anytime soon, the NOCs will no doubt continue to push on and innovate, driven by the need to secure and develop energy resources for strategic reasons,” Yang said.