While the prospect of a cold winter is threatening to send an energy market already in crisis spiraling further, efforts in China to secure the supplies it needs to get through the season could make matters worse. 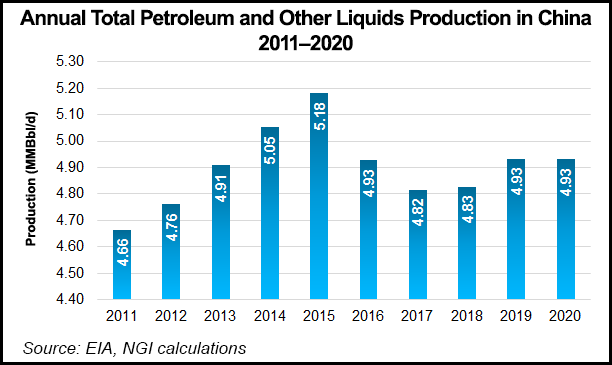 China is the world’s largest energy consumer, and it has rapidly transformed into a natural gas-buying behemoth in recent years with an outsized influence over global trade flows.

Environmental and safety restrictions on coal, maxed out liquefied natural gas (LNG) export utilization across the world and rising commodity prices have left the country short on energy supplies. It’s thirst for natural gas has also been supported by policies that have spurred coal-to-gas switching and strong economic growth.

Power rationing in recent weeks has spread to more than half of the country’s provinces, “sending already hyperactive coal and natural gas prices further north,” said Wood Mackenzie’s  Gavin Thompson, Asia-Pacific vice chairman. “China’s leadership undoubtedly anticipated this, but as the country’s power crisis mounts the message to its state-owned energy suppliers is clear: blackouts this winter will not be tolerated.”

Last month, China’s National Development and Reform Commission (NDRC) issued a statement saying it would help to boost domestic natural gas production and aid in bringing in more coal and spot LNG imports. At an emergency meeting, government officials also reportedly ordered state-owned companies to do everything in their power to secure energy supplies this winter.

“The impact of China’s power crunch is being felt globally,” Thompson wrote in a blog post earlier this month. “As Beijing’s ‘at all costs’ directive pushes coal and gas prices higher, governments, energy suppliers and customers across Asia and Europe are bracing for a tough winter ahead.”

Coal prices have tripled this year, but some nations have been forced to burn more of the fossil fuel as leading gas benchmarks have quadrupled and other energy supplies have been short too. Europe and Asia have been locked in a fierce battle for LNG cargoes. A cold winter in China could create more problems in Europe, where industrial blackouts have occurred and energy suppliers have folded among the commodities rally.

According to the NDRC, China has already purchased 174.4 billion cubic meters of gas for the heating season that runs from November to March. According to Bloomberg New Energy Finance, that’s just below the current forecasted demand for winter, which could be higher than expected. According to the China Meteorological Administration, La Nina could bring a colder-than-normal winter.

Chinese buyers exited the spot market amid soaring prices that started to creep upward late in the summer, but they’ve since returned, despite delivered LNG prices to China that are above $20/MMBtu.

Energy shortages in China are also threatening to derail the country’s climate goals. Premier Li Keqiang said in a statement that the country must first assess the causes of the crisis before it can put in place a timeline for peak carbon emissions.

The country has turned to natural gas to help meet its environmental goals. Natural gas accounted for about 8% of consumption in 2019, but the fuel continues to take up a larger share of the nation’s energy mix. The nation has driven overall demand for the super-chilled fuel in Asia as domestic production has lagged. It is now on track to become the world’s largest LNG import market this year.

“Despite efforts to increase domestic production and pipeline imports, China will continue to rely on increasing amounts of seaborne imported LNG to satisfy its natural gas consumption demands,” Evercore said.

“For U.S. focused investors, the biggest takeaway to China’s LNG shortfall and current energy ‘crisis’ are the potential benefits for U.S. LNG exporters, as China seeks to rapidly secure long-term LNG supply and diversify its energy economy away from coal,” Evercore added.

Between January and August, the U.S. accounted for 11% of China’s total LNG imports, ranking the U.S. among the nation’s top-4 suppliers. NGI data shows that 69 U.S. cargoes made their way to China through July, second only to South Korea on the list of top destinations for American cargoes this year.

Evercore noted that China has plans to operate more than 30 LNG import terminals with the capacity for 200 million metric tons/year (mmty) by 2025, well above the country’s current capacity of 96 mmty.

While China’s thirst for natural gas could pose challenges for the market this winter, it’s already benefiting American exporters.

Reuters reported Friday that major Chinese energy companies are currently in talks to secure more long-term supplies from U.S. terminals. China’s national oil companies account for the bulk of the nation’s LNG import capacity, and at least two of them are in discussions for more supplies, mainly with Cheniere Energy Inc. and Venture Global Inc., according to Reuters.

Even smaller Chinese natural gas suppliers are stepping up for additional gas. An affiliate of ENN Natural Gas Co. Ltd recently secured 900,000 metric tons of LNG from Cheniere for a 13-year term.