China’s natural gas production increased 12.9% year/year in May to 14.4 billion cubic meters (bcm), according to data by the country’s National Bureau of Statistics (NBS). 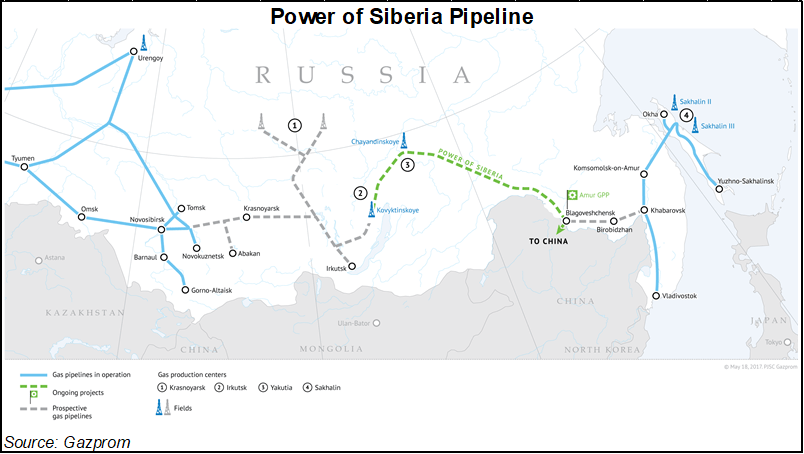 May’s production was up from a 7.9% increase in April. For the first five months of the year, gas output has increased about 9.8% from a year ago to 72.5 bcm. The production increases come amid an effort by the country’s oil and gas majors to ramp up production to meet steadily increasing domestic demand.

State-owned oil and gas majors China Petroleum and Chemical Corp., aka Sinopec, and China National Petroleum Corp. (CNPC), the country’s largest producer, said late last year they were speeding up drilling and exploration in tight oil and gas formations in the western part of the country.

Sinopec and PetroChina Co. Ltd. are drilling unconventional wells in the mountainous area of the Sichuan Basin. Sinopec is drilling wells in the Fuling development, while PetroChina has two projects underway, Changning-Weiyuan and Zhaotong.

Sinopec said in 2018 it planned to develop at least 66 gas wells and install 23 gas drilling stations by winter to ramp up supplies from fields in the southwestern part of the country. CNPC reportedly said it planned a five-fold increase in shale gas production by 2020.

China is attempting to partially replace coal used for heating and industrial usage. The government has mandated that gas make up at least 10% of the energy mix by 2020 to help offset rampant air pollution levels and to meet the commitments under the United Nations global climate accord in 2015, otherwise known as the Paris Agreement. Beijing has also set further gas earmarks for 2030.

The problem for China, however, is that even with new gas production it may be unable to meet domestic consumption, leading to more reliance on both piped gas and liquified natural gas (LNG) imports.

Last year domestic gas production reached 161 bcm, but China’s total gas demand in 2018 reached 280 bcm, according to a report by Energy Aspects. Over the past five years, annual gas output increased by an average 9 bcm (7%), while demand has grown by an average 23 bcm each year.

To help meets its growing gas demand, China has entered into a number of capital-intensive gas pipeline agreementswith Russia in 2014, totaling more than $400 billion, including the $55 billion, 2,500-mile Power of Siberia pipeline that is to deliver 38 bcm/year from Eastern Siberia to China. At the time the deal was signed, analysts forecast that gas from Power of Siberia would meet around 12% of China’s gas demand.

The Power of Siberia is on track to become operational by December, with start-up operations currently underway, Russia’s Gazprom said earlier this month. Gazprom owns and will operate the system.

Gas flows from the pipeline could also decrease Chinese LNG demand, further straining both LNG producers and suppliers that need to offload uncontracted cargoes. A drop in Chinese procurement of the super-cooled fuel also could impact spot LNG prices in Asia, which are currently trading around three-year lows because of tepid demand in the region and fresh supply hitting the market from greenfield projects in Australia, the United States and Russia.

However, the impact from Power of Siberia gas is likely to be short-lived, according to a recent report by the International Gas Union (IGU). “The growth of China’s LNG imports will slow from December when the Power of Siberia connection with Russia is due to enter service, but this is likely to be temporary. Once the new capacity is absorbed the growth rate will resume and China will take over Japan as the world’s top importer,” the IGU said.

It may take time for the new capacity to be absorbed, according to senior research fellow Keun-Wook Paik of The Oxford Institute for Energy Studies, who is an expert on Sino-Russian oil and gas.

“Power of Siberia will start to flow in December, with the pilot volume of 5 bcm/year, but it will take five years to reach full capacity of 38 bcm/year,” he told NGI. “In the short-term perspective, the impact toward LNG imports will not be serious.”

He added that in the long-term the most serious challenge for the Power of Siberia will come from Russia’s Arctic LNG supply considering the price from Novatek’s Arctic LNG 2 project could be substantially lower than gas supply from Qatar, Australia and the United States.