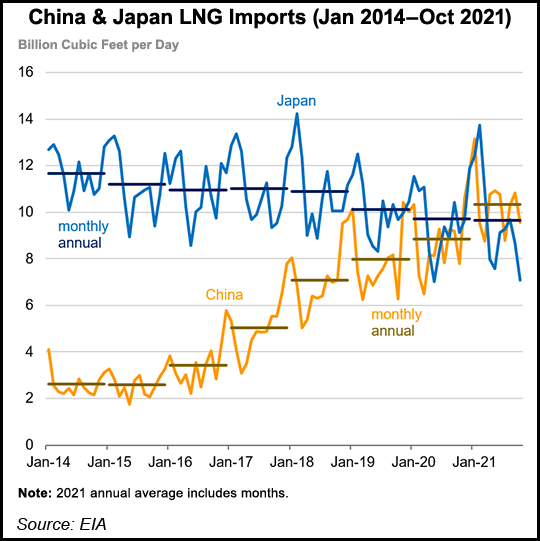 The small-scale LNG deal is the latest in a series of both large and small supply agreements signed this year as China’s thirst for natural gas has continued increasing. Pavilion said it would supply 0.5 million metric tons/year (mmty) of LNG from its portfolio for an unspecified period to Hangjiaxin’s 1 mmty Jiaxing LNG import terminal in Zhejiang province in eastern China.

Hangjiaxin CEO Sun Lianqing said the agreement would help secure stable LNG supplies for the Jiaxing terminal. Zhejiang province is a densely populated and affluent region that is also among the country’s largest agricultural production centers.

China surpassed Japan in 2021 as the world’s leading LNG importer, according to data from various government agencies. Through the first 10 months of 2021 China’s LNG imports averaged 10.3 Bcf/d – a 24% increase over the same period last year, according to the U.S. Energy Information Administration.

Under the deal with CSPIC, BP would deliver pipeline gas sourced from the Guangdong Dapeng LNG receiving terminal to the southern Guangdong province. The British major owns a 30% stake in the terminal and was the first international energy company in China to invest in an operating LNG terminal.

NGI calculations show China was the second leading destination for U.S. LNG exports between January and October, receiving 108.5 American cargoes. South Korea received the most, importing 110.5 U.S. cargoes. It also was a busy year for U.S. export terminals, which cut nearly 20 long-term deals to supply LNG, with Chinese buyers accounting for nearly half of those.

Environmental and safety restrictions on coal, maxed out LNG export utilization across the world and rising commodity prices left China short on energy supplies in 2021 and forced it to aggressively secure natural gas imports. Support also has come from policies that have spurred coal-to-gas switching and strong economic growth.