If China buys more LNG on the spot market this winter it could have an impact on what’s available to European buyers over the next few months. 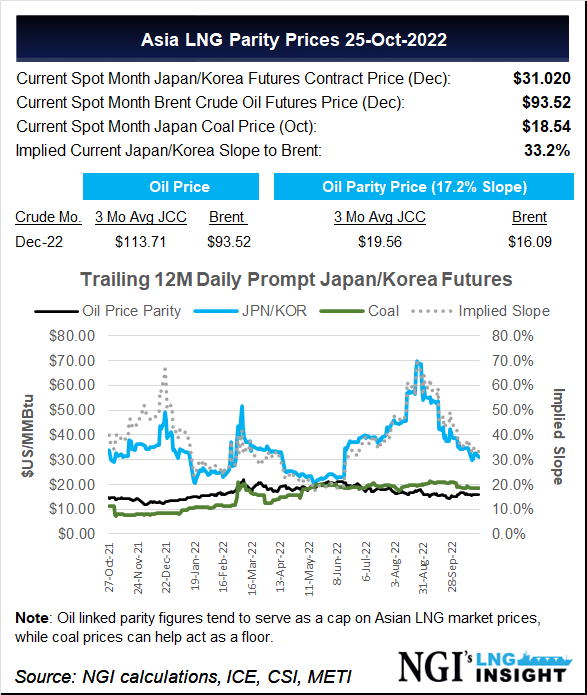 “Chinese companies have been selling term cargoes on the spot market,” he told NGI, “ as domestic demand for LNG has been curbed by subdued industrial activity, growth in coal production and less expensive pipeline gas supplies.”

In 2019 and 2020, Chinese companies bought spot LNG due to its high flexibility and low price,  according to a recent report by Columbia University’s Center on Global Energy Policy (CEGP). But as LNG spot prices picked towards the end of 2020, “Chinese buyers suddenly found themselves exposed to spot market price risks and uncertain about spot LNG supply stability due to global LNG supply tightness.”

Cold weather in Northeast Asia in January 2021, and Russia’s invasion of Ukraine in February resulted in high prices on the Asian spot market. By the second half  of 2021, China was paying $50/MMBtu amidst its worst power shortage in two decades.

As Beijing requested energy companies to secure supplies for winter of 2021–2022, China’s average LNG import price in 2021 “increased by 60% from 2020, massively squeezing the profits of Chinese buyers which signaled a shift in its buying strategy toward long-term contracts,” CEGP said.

China turned to long-term contracts to avoid volatility in the Asian spot market. China alone represented about 40% of all new LNG volumes contracted in 2021, when the country signed up for nearly 38 million tons annually, slightly more than China’s total LNG imports in 2021 of 36.8 Mt.

Given surplus Russian supplies, China reportedly resold several contracted United States and Australian LNG cargoes this summer at a profit. Covid-19 lockdowns have also cut into demand in the country.

The chance of Chinese buyers re-emerging in the spot market has become “unlikely,” Booth said.

“With the recent uptick in Russian imports from Yamal and Sakhalin II, China gas needs are balanced or even slightly long, as pipeline gas and other fuels are positioned to take up any extra winter energy demand.”

China has since cut back on re-selling LNG cargoes to ensure supply for the upcoming winter season, which could bring frigid temperatures. The China Meteorological Administration recently said that a La Nina Weather pattern is forecast through the winter, meaning colder-than-normal weather could be likely.

“The weather outlook indicates an increased chance of a colder-than-average winter in North East Asia, how this materializes remains pivotal to the region’s spot LNG needs across winter,”  Booth said.

Europe must continue cutting its natural gas consumption this year and act quickly to secure additional supplies if it expects to make it through next winter, according to Brussels-based think tank Bruegel. The European Union (EU) must cut demand this year by 13% from the previous five-year average through at least Oct. 1, Bruegel said…