China announced on Friday it plans to impose tariffs beginning Sept. 1 on $75 billion worth of U.S. goods, including domestic oil, in response to rising taxes set to be imposed by the Trump administration. 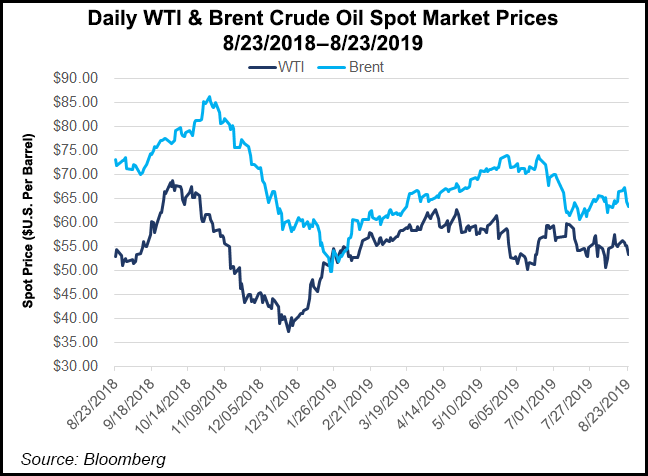 In part on China’s news and the responses by President Trump were said to have pressured the stock market on Friday, sending the Dow Jones Industrial Average plunging. The Dow ended the day down 623.34 points or 2.37% from Thursday. CME Group oil futures settled down $1.18/bbl on the day at $54.17.

The 5% and 10% tariffs by China, set to take effect in September and mid-December, follow President Trump’s recent edict to tax another $300 billion of Chinese goods. The U.S. tariffs are to take effect on the same dates as the Chinese taxes.

On the news, the president tweeted, “We don’t need China and, frankly, would be far better off without them…” and threatened further actions. “Our great American companies are hereby ordered to immediately start looking for an alternative to China, including bringing…your companies HOME and making your products in the USA.”

In addition to attacking China, Trump lashed out on Twitter at Federal Reserve Bank (Fed) Chairman Jerome Powell for not doing enough to boost the U.S. economy. The president questioned in a tweet whether the central bank chairman was a “bigger enemy” to the United States than Chinese President Xi Jinping.

China overall has reduced its U.S. oil imports in recent months as the trade dispute launched last year by the Trump administration has continued. However, the escalation now may pose dangers for U.S. liquefied natural gas (LNG) exports and possibly some of the terminals not yet sanctioned. The sale and purchase agreements (SPA) with Chinese customers could be at risk, said analysts with ClearView Energy Partners LLC.

Analysts had said it was no coincidence that China’s Ministry of Finance announced the new tariffs on Friday, the same day Trump was set to embark on the Group of Seven, i.e. G-7, trade-focused summit in France. However, following Trump’s tweets disparaging China and Powell, ClearView’s team said the comments raised red flags.

“We regard this development as potentially far more negative for energy than the 5% tariff on U.S. crude oil exports…,” analysts said. “Specifically, we reiterate that a flat-out escalation could put U.S.-China business relationships and the sanctity of the contracts that underlie them at risk, too…

“We would also continue to highlight potential trade flashpoints with India, Japan and the European Union, all of which have the potential to further weigh on energy demand, limit access to growth markets and/or discourage the signing of contracts,” especially LNG SPAs.

“Any sustained tariffs between the U.S. and China is obviously not good for the second wave of U.S. LNG facilities, and considering China is the single largest growth market in the world, that does cloud things for the next wave of LNG, particularly for more greenfield projects,” said NGI’s Patrick Rau, director of strategy and research.

However, “there are some potential mitigating factors,” Rau said, “as this is still very much a long-term, long lead-time process. These facilities wouldn’t be needed for another four-to-five years, assuming consensus worldwide LNG demand growth forecasts come to fruition.”
Trump still remains the “presumptive favorite” to win reelection per Las Vegas oddsmakers, “but his not winning the election would likely cast doubt over the tariffs,” Rau said. “Or could he seek political gain by reducing/eliminating them ahead of his election, especially if the U.S. economy has fallen into a recession by then?”

U.S. natural gas prices still remain among the lowest in the world, Rau noted, even with Qatar’s decision to expand its LNG capacity that may cut into that advantage somewhat.

Other global LNG export facilities could serve China, he said, and the United States then could direct LNG “to markets those existing facilities leave behind. A final advantage is U.S. projects may have a bit of an easier time finding project financing than in other parts of the world, everything else being equal.”

The American Petroleum Institute (API) urged the administration to reach a trade agreement with China quickly and lift all of the tariffs.

“This escalation of the U.S.-China trade war is another step in the wrong direction, the consequences of which will be felt by American businesses and families,” said API’s Kyle Isakower, vice president of Regulatory and Economic Policy. “In addition to the impacts on the U.S. economy and jobs, U.S. energy leadership and global competitiveness are threatened as U.S. natural gas and oil exports continue to serve as targets for retaliation.

“We urge the administration to quickly come to a trade agreement with China that would lift all tariffs under Section 301, including the damaging retaliatory tariffs on American energy exports.”

In addition, the U.S. natural gas and oil industry is negatively impacted by the tariffs on more than 100 industrial products under Section 301 and by steel tariffs under Section 232, and is subject to a 25% retaliatory tariff on U.S. LNG exports to China.

Despite the pullback in demand since the start of the year, “China is still an important customer, and while this 5% tariff won’t have a big impact on other countries’ demand for U.S. crude, it’s clearly not a good headline for oil markets,” Barrett said.

“While barrels are fungible and U.S. barrels going into China could be rerouted to other destinations, sending displaced non-U.S. barrels into China, the net impact of tariffs will be higher prices for crude consumers, exacerbating concerns around near-term crude oil demand. As a result, we should see weakness not only in WTI, but also Brent, as any new tariff (on crude or other items) has negative implications for slowing global crude demand.”

In another sign of weakness for U.S. products, IHS Markit on Thursday reported the August U.S. Purchasing Managers Index, comprised of economic indicators derived from monthly surveys of private sector companies, fell to 49.9 from 50.4 in July. The contraction was the first time it has fallen under 50 since September 2009.

“The month-over-month price indexes for raw materials and finished products decreased, turning negative for the first time since 2016,” with the composite index down by 6 in August from 1 in July, Fed economists noted.

The August index was the lowest reading since March 2016. The composite index is an average of the production, new orders, employment, supplier delivery time and raw materials inventory indexes.

The Tenth District in the latest survey asked respondents about the impact of recent tariff announcements and expectations regarding the duration of trade tensions.

Said another, “Our distributor in China is now paying an additional 31% in tariffs compared to 2018. He has had to raise his prices to consumers, and so our sales have dramatically slowed down.”

Respondents repeatedly expressed wariness about the continuing trade war. “We are seeing a slow down in activity from some of our larger customers due to the tariffs,” said one respondent.

“Tariffs are negatively affecting business confidence,” another respondent said. “We make capital goods. Our customers delay investments when the climate is turbulent and uncertain. In addition, tariffs negatively affect many of our input costs, such as electronics and steel.”