Visions of breaking into the international, big league liquefied natural gas (LNG) trade with Canadian supplies are spreading inland to Alberta from the Pacific Coast of British Columbia (BC). 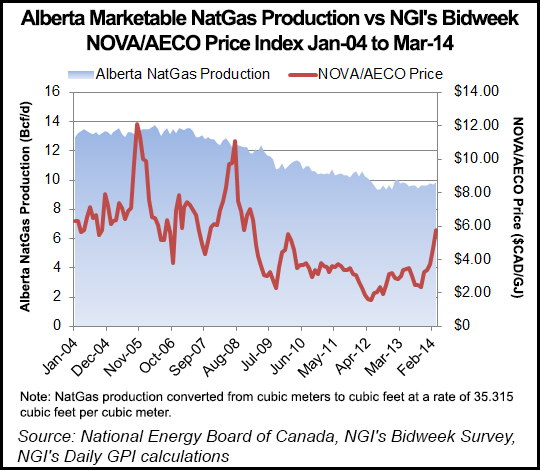 The trio has formed Gascana AB Energy Ltd. to work on plans for a liquefaction plant as an anchor tenant for a proposed, 1,000-acre industrial park. As an agency of Alberta’s capital city, EEDC aspires to build up the site in next-door Sturgeon County into a hotbed of investment and employment.

The Gascana AB LNG scheme starts small, aiming for exports of about 3,000 tonnes or 150 MMcf/d. The idea is still in early, conceptual planning stages with no forecasts of costs or how the product would reach a Pacific Coast tanker terminal across about 1,200 kilometers (720 miles) of Alberta and BC.

But the Edmonton civic agency is renowned for thinking big, and Gascana is billed as a start on an international economic partnership with Chinese enterprise on a grand scale, the Sino Canada Natural Gas Development Initiative (SCDI). EEDC says its plan “represents a total investment in excess of C$4 billion (US$3.7 billion) and will focus on natural gas-related industries including refining, upgrading, technology research and manufacturing through the development of an industrial park and business incubator.”

EEDC predicts the collaboration with Chinese industrialists “will include a 1,000-acre Sino Canada Natural Gas Industrial Park in Sturgeon County and a Sino Edmonton Business Incubator in Edmonton, built in three phases over five years. Upon completion, SCDI will achieve C$5 billion (US$4.6 billion) in annual production and create over 2,000 permanent positions.”

The Alberta entry into the LNG race to Asia is still only a memorandum of understanding among the participants. But in a statement outlining the industrial park plan, EEDC President Brad Ferguson said, “We are the epicenter of the industrial supply chain in western Canada, and our manufacturing, research environmental monitoring, transportation and value-added energy sectors will continue to expand as Chinese demand grows.”