China, the world’s largest buyer of LNG,  is reselling the super-chilled fuel to Europe and Asia as an economic slowdown and a boost in Russian gas supplies have created surplus inventories. 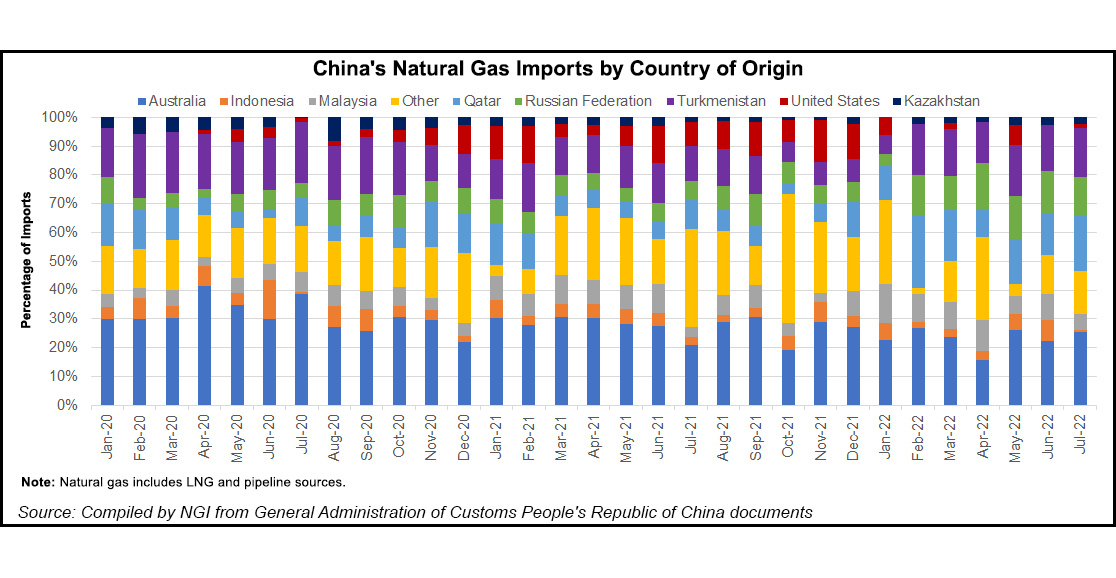 In 2021, Chinese gas demand grew at the fastest rate on record, when year/year imports increased by 19.9%, according to the Middle East Institute (MEI). China imported more LNG in 2021 than any other country, accounting for nearly 60% of global LNG demand growth.

But 2022 has been a different story for LNG imports, proving China could become a swing player for the global gas market depending on its future gas needs.

“We have seen a retreat in LNG imports from China, down by more than 20% in January-July this year from a year earlier,” said Rystad Energy senior analyst Wei Xiong.

“Slowing demand is one of the reasons,” she told NGI. “This year, China’s gas demand was hit hard by pandemic related controls, with activities in the industrial and commercial sectors notably slowing down.”

“To avoid high import costs, Chinese importers have reduced their spot buying this year,” she added. “The percentage of spot cargoes for China’s total LNG imports has fallen below 20% from 40% last year as the majority of imported LNG have been contracted cargoes.”

With the exception of Russia and Qatar, all other major LNG suppliers have seen trading activity with China decline in 2022.

Chinese energy companies have reportedly resold Russian gas to Europe. Russian LNG and pipeline imports to China are on the rise. China purchased 2.35 million tons (Mt) of LNG in the first six months of the year from Russia, a 28.7% increase compared to the same period last year, according to a South China Morning Post report.

“The combined effects of slackened Chinese and increased European demand for LNG resulting from the fallout from the conflict in Ukraine can also be seen in the pattern of Chinese LNG purchases during the first half of this year, with the volume of imports from the U.S. and Australia tumbling, and imports from Russia and Qatar growing,” MEI said in a recent report.

Amid slow demand and a mild winter, and prior to Russia’s invasion of Ukraine, China Petroleum & Chemical Corp, aka Sinopec, issued a tender in January to sell 45 LNG cargoes between February and October.

Cargoes are being “resold at source, and are not reloads,” Kpler LNG analyst Laura Page said. From January to August,  China’s reloads were very low, according to Kpler data. LNG reloads totalled 0.271 Mt with only one European country, Italy, receiving volumes. China sent the remaining volumes to Thailand, Japan, and South Korea.

Increased deliveries via the Power of Siberia pipeline have been driving the firm growth in pipeline flows to China, Xiong said.

Although Chinese customs stopped publishing pipeline imports  by country since the start of this year, Rystad estimates flows via Power of Siberia  from January to July increased by nearly 70% year on year to 6.9 Mt.

“Piped gas imports have become more appealing to China due to its lower costs than LNG,” Xiong said. “Piped gas import prices were only $7-8/MMBtu on average in recent months, only about half the average price of imported LNG, including spot cargoes and contracted volumes.”

Whether China continues as a swing player providing surplus gas to the global market depends on future domestic gas demand. If China’s current selling position is reversed, Europe and Asia will have to look elsewhere for additional LNG.

“[Chinese] domestic gas users are sheltered from global price increases given domestic price controls, industrial demand is suffering from both high costs and weak demand, so the real test here too will be when demand recovers,” China energy specialist Michael Meiden wrote in an Oxford Institute for Energy Studies (OEIS) report earlier this summer.

“The extent to which industrial users can switch back to coal is limited and ahead of the winter, if buyers need to restock and economic momentum increases, LNG buying could recover, suggesting a greater pull on global markets in 2023,” Meiden said.

China’s LNG imports are forecast to fall over 14% year/year to 69 Mt in 2022, the largest decline since China started LNG imports, Wood Mackenzie said in July.

Rystad forecasts China’s LNG imports to fall by 15% year/year to 67 Mt. Rystad expects buying to pick up in the coming years, although in a relatively flat trend compared with the growth of recent years.

“The large volume of LNG term contracts China has signed since last year and the optimistic growth in piped flows will largely waive supply concerns. Their lower costs than spot LNG also support the healthy growth in demand.”