A return to more seasonal conditions in the East during the week ended Friday (Jan. 11) drove big gains for weekly natural gas spot prices at a number of regional locations, while the prospect of more intimidating cold later this month teased futures bulls; the NGI Weekly Spot Gas National Avg. picked up 16.5 cents to $2.970/MMBtu. 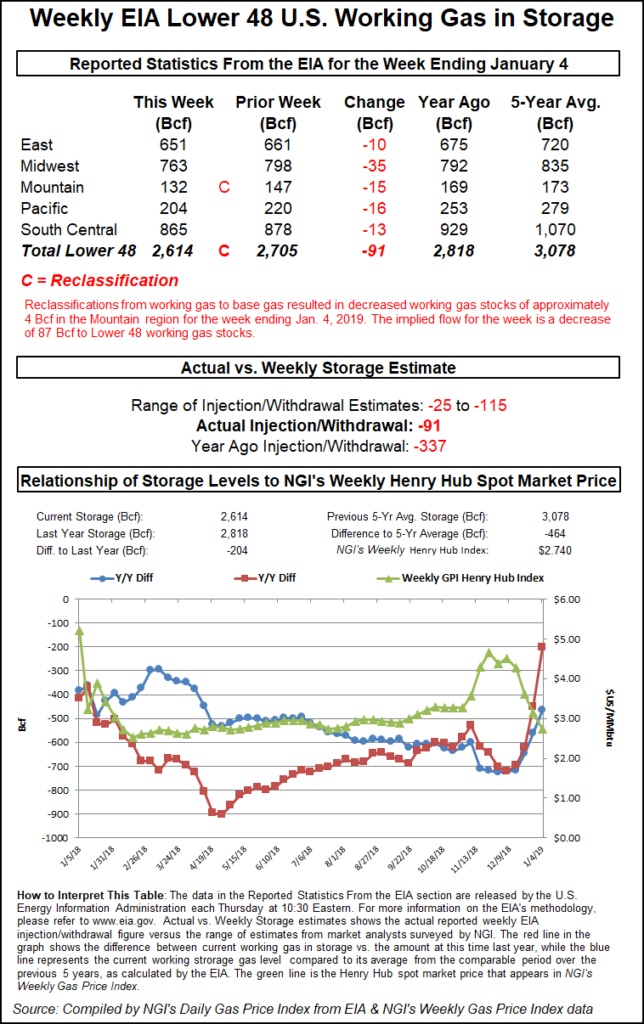 With reports of near- to below-normal temperatures and wintry precipitation pushing into the region during the week, prices in the often volatile Northeast posted hefty gains. Algonquin Citygate added $2.090 to average $5.070, coming a little closer to the elevated winter premiums that have characterized New England spot prices in recent winters.

Weekly prices generally strengthened through the middle third of the Lower 48, with the market appearing to stabilize after heavy losses coinciding with sustained mild temperatures through December and early January. Henry Hub climbed 12.5 cents to $2.865.

Further West, points throughout the Rockies and California moderated on the week, led by SoCal Citygate, which tumbled $1.855 to $4.865. Data from Southern California Gas indicated the utility was experiencing somewhat lighter demand on its system compared to conditions that recently prompted a series of withdrawals from the restricted Aliso Canyon facility.

Looking at the futures, with major weather models Friday continuing to show a shift to colder temperatures for key markets later this month, the winter contracts rallied sharply to set up a potentially pivotal weekend for prices. February Nymex futures settled at $3.099 Friday, up 13.0 cents. Unlike sessions earlier in the week, the bulls managed to hold their ground as the front month closed decisively above the $3 mark, capping off a steady rally that began to pick up steam after lunchtime on the East Coast. For the week, the front month gained more than nickel after settling at $3.044 the Friday before.

NatGasWeather highlighted much colder trends for Jan. 20-25 from the latest weather models Friday, with the milder European model adding an “impressive” amount of projected heating demand for the 15-day outlook period.

This put the European model in better agreement with the more bullish Global Forecast System (GFS), which earlier in the day had advertised the potential for “several frigid cold shots with at least some polar air” to track into the northern and eastern United States during this period, according to the forecaster.

“While we see the risk being toward colder trends over the weekend, it’s a dangerous weekend to hold because of the sharpness in the temperature gradient between frigid polar air over Canada and much milder air over the middle U.S.,” NatGasWeather said. “Thus, a slight shift in this gradient in either direction would lead to changes in forecasted heating demand

Meanwhile, the Energy Information Administration (EIA) on Thursday reported an 87 Bcf withdrawal from U.S. gas stocks for the week ended Jan. 4, a number that fell on the bullish side of expectations but not enough to impress natural gas futures markets.

EIA also reported a 4 Bcf reclassification in the Mountain region that resulted in a net 91 Bcf decrease in inventories for the period.

Perhaps tantalized by the prospect of colder temperatures returning later this month, February Nymex futures had probed above $3.085 earlier Thursday morning before receding to around $3.020-3.030. As EIA’s figure crossed trading screens at 10:30 a.m. ET, the front month briefly popped to as high as $3.066, but by 11 a.m. ET prices had dropped back down to around $2.994, up 1.0 cent from Wednesday’s settle but down from pre-report trading.

Prior to Thursday’s report, major surveys had pointed to a pull in the mid-70s Bcf but with estimates running the gamut from minus 25 Bcf to minus 115 Bcf. Intercontinental Exchange EIA Financial Weekly Index futures settled Wednesday at a withdrawal of 78 Bcf.

The 87 Bcf figure followed a bearish surprise the week before, when EIA reported a meager 20 Bcf pull. While larger than many survey respondents had predicted, 87 Bcf still pales in comparison to the massive pull recorded around the same time last year.

A year ago, EIA reported a record-setting 359 Bcf withdrawal for the week ended Jan. 5, 2018, a period that saw intense cold drive huge price spikes along the East Coast. The five-year average for the period is a withdrawal of 187 Bcf, according to EIA.

“We see this as more week-to-week noise with this EIA data following a miniscule storage pull last week that surprised,” Bespoke Weather Services said following the report. “This storage number appears to be an implicit revision during this noisy holiday period, and accordingly should not be read into too much. However, the production dip observed last week that has carried over into this week has certainly played a role, and with balances tightening up here this print can add support moving forward with any colder weather trends.”

By region, the largest withdrawal came in the Midwest at 35 Bcf, while the East withdrew 10 Bcf for the week. In the Pacific, 16 Bcf was withdrawn, while 13 Bcf was pulled from South Central stocks, including a 19 Bcf withdrawal from nonsalt that offset a 6 Bcf injection into salt caverns.

EIA reported an 11 Bcf withdrawal in the Mountain region, with a net 15 Bcf decrease in regional stocks for the week after the reclassification of 4 Bcf from working gas to base gas.

Compared to the last seven New Year’s storage weeks — not including last year because of exceptional demand during the “bomb cyclone” event in the East — the 87 Bcf pull is loose by more than 31 Bcf, according to the analysts.

“Coal was down around 8 average GWh, and gas was up 18 average GWh week/week for an estimated 3.5 Bcf/d more gas burn” versus last week.

Societe Generale as of Friday had revised lower its projected 1Q2019 average price to $2.98 after the recent sell-off in the winter strip. Analyst Breanne Dougherty said the selling was likely driven by managed money players reducing their long positions (though the government shutdown has meant no Commodity Futures Trading Commission data to confirm).

“We see 1Q2019 as still exposed to upside volatility (off this lower baseline of $3) if a cold snap presents itself between now and the end of February; and our view on the remainder of 2019 remains bearish with the end of injection season 2019 as vulnerable to weak prices tied to storage containment fear,” Dougherty said.

In the spot market Friday, after sharp gains earlier in the week coinciding with a stretch of colder temperatures, East Coast gas buyers showed limited interest in locking in deals for delivery over the weekend.

Radiant Solutions was calling for below-normal temperatures to continue along the Interstate 95 corridor over the weekend before moderating somewhat by the start of the upcoming work week. New York City was expected to see average temperatures climb from the upper 20s Friday and Saturday to the mid-30s by Tuesday and Wednesday. Further south, the forecaster called for average temperatures in Atlanta to warm slightly to near-normal levels by the end of the weekend, including highs in the 50s by Tuesday.

A weather system with rain and snow was expected to track through the Southern Plains and Texas Friday before moving across the Tennessee Valley, Southeast and Mid-Atlantic coast over the weekend, NatGasWeather said Friday.

“At the same time, cool conditions will linger across the Northeast to keep national demand near normal through the weekend,” the forecaster said. The upcoming week will “bring mostly mild conditions across the southern two thirds of the U.S., with light winter demand where highs will be mostly in the 50s to 70s.” Most demand in the week ahead should come from “glancing blows of cold Canadian air” hitting the northern United States, but this would be “more intimidating if sub-freezing air dipped just a little further into the U.S.”

Prices were generally steady Friday across most of the Gulf Coast and Texas. Houston Ship Channel added 10.0 cents to $2.915.

In the West, SoCal Citygate sold off sharply heading into the weekend, dropping 61.5 cents to average a still-elevated $4.320 as other price moves in the Rockies and California were mixed. Utility Southern California Gas was calling for demand on its system to total around 2.9 Bcf/d over the weekend, versus pipeline receipts of around 2.7-2.8 Bcf/d.