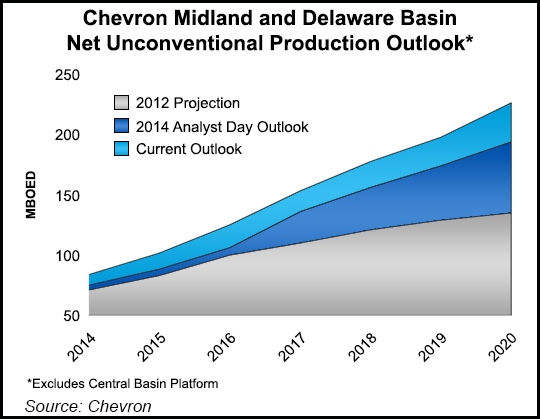 The San Ramon, CA-based oil major issued its quarterly results on Friday. Jeff Shellebarger, president of the North America exploration and production (E&P) business, provided an overview of upstream operations, which extend across six business units from the deepwater Gulf of Mexico into Canada. A lot of the questions from analysts were about unconventional activities, particularly those in the Permian Basin.

Production has averaged 731,000 boe/d in North America, representing almost 30% of Chevron’s total upstream volumes. In the Permian Basin, Chevron has been active since the 1920s, but it’s been reactivating and expanding it legacy position over the past few years.

“We are not in a drill-or-drop situation,” Shellebarger said of the Permian. “Our low lease holding costs allow us to focus on the highest return projects in a paced manner while leveraging industry learnings. Our efforts on lowering cost while simultaneously increasing production rates and ultimate recoveries are helping to improve overall well and program economics.”

Optimizing well placement and lateral lengths have become the name of the game for most onshore operators. To help defray costs, Chevron has executed joint development agreements in the Permian to ensure more efficient buildout of takeaway capacity and infrastructure.

In the Midland subbasin, production has increased by 15,000 boe/d, or 40% during the first nine months of the year, and we are on track to drill 10% more wells than originally planned for the year. As we mentioned during the second quarter call, we are transitioning toward a multi-well pad based horizontal program. The Midland vertical wells have demonstrated that all of the identified benches are potentially productive.”

On the southwestern edge of the Midland, Chevron’s Bradford Ranch program “is a great example of our transition to horizontals,” he said. “We have drilled our first two wells. We are now batch drilling the next four. The first well has been completed; it’s flowing back and will be on production next month [November]. At its full potential, we expect up to 150 wells on this development with lateral lengths ranging from 5,000 to 7,500 feet. We believe that we are well positioned in what looks like the sweet spot at the Midland basin horizontal play.”

Results from the Delaware subbasin have been equally positive, Shellebarger said. Production has increased by about 20,000 boe/d, or 60%, during the first nine months of the year, with drilling of 180 wells planned this year.

“Our company-operated Salado Draw horizontal program in Lea County, NM, remains on track to spud its first well within the next month,” Shellebarger said. “While there are multiple benches in this area, we are targeting the Upper Avalon with its initial 16-well development. With success we envision more than 60 well locations at Salado Draw. Our recent well results give us continued optimism on the growth potential in the Delaware. Wells drilled in the third quarter have 30-day initial production rates that averaged just over 1,000 boe/d.”

In the Utica/Marcellus shales, Chevron has prioritized its near-term efforts to five core development areas in West Virginia and southwestern Pennsylvania. They aren’t high priorities today, but they are long-term prospects.

When Chevron bought into the Appalachian area four years ago, Shellebarger noted, “it was primarily dry gas and that’s what was driving the business,” but it’s not today. Instead, the company is looking at the “liquids-rich gas side and the deeper Utica plays…Again we’re seeing the same efficiencies in the drilling and completions up there as we see everywhere else. It’s competing for our capital and it’s important in our portfolio,” but for now, only one rig is drilling in the Utica.