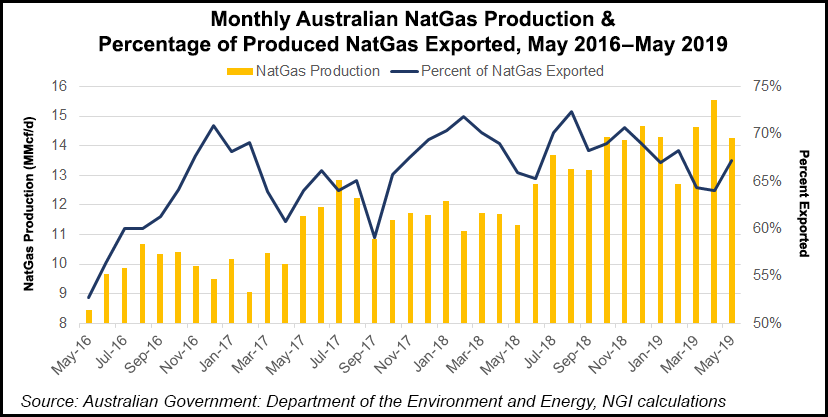 The $34 billion NWS project is one of the world’s largest liquefied natural gas (LNG) producers, supplying oil and gas to Australian and international markets from huge offshore oil, gas and condensate fields in the Carnarvon Basin off the northwest coast of Australia. The project includes five production trains and produces up to 16.3 million metric tons/year (mmty) of LNG.

Wheatstone was Australia’s first LNG facility and is located 7.5 miles west of Onslow on the Pilbara coast of western Australia. The foundation project consists of two production trains with a combined capacity of 8.9 mmty and a domestic gas plant.

Chevron Australia managing director Al Williams said the 60 PJ commitment was proof that his company was committed to the local gas market. “We are working to increase the supply of natural gas into Australia and international energy markets to help realize the objective of affordable solutions to delivering additional energy the world needs while reducing emissions globally,” he said.

“Over recent months we’ve commissioned the Pluto pipeline gas and LNG truck loading facilities and started domestic gas production at Wheatstone, building on our foundation domestic gas business at the NWS,” he said.

In May, Chevron Australia and joint venture partners in the Gorgon LNG export project launched the second stage drilling campaign off the northwest coast of the country. Gorgon Stage Two will expand an existing subsea gas gathering network on the Chevron-led LNG facility and is part of the original development plan. Chevron Australia said the campaign includes drilling 11 additional wells in the Gorgon and Jansz-Io gas fields to maintain long-term supply to the 15.6 mmty LNG and domestic gas plants on Barrow Island.

In December, the company signed a deal with Alcoa of Australia Ltd (Alcoa) for 64 PJ of natural gas delivery starting in 2020 from its stakes in the Wheatstone, Gorgon and NWS facilities

Woodside has also signed several deals to provide gas to the domestic market. In April, the Perth-based company said that its Pluto LNG project had opened its new LNG Truck Loading Facility to help develop a local LNG market for remote power generation and transport fuels.

Woodside said in December it had supplied its first gas to the Dampier to Bunbury Natural Gas Pipeline with successful commissioning of the Pluto pipeline gas facility.

The Energy Users Association of Australia (EUAA) said in April that rising commodity prices could force many east coast manufacturers out of business, as gas costs for domestic users had risen by as much as 300% since Australia began exporting LNG from east coast terminals. EUAA called on the government to act, noting that the Australian Energy Market Operator already had warned that the east coast faced a gas supply shortfall as soon as 2024.

Two years ago, former Prime Minister Malcolm Turnbull’s administration pulled back from threats to curb LNG exports after three major gas producers agreed to provide supply for the domestic market to ease potential shortages. Overseas customers at the time were getting first dibs on Australian gas supply and charged less than domestic customers.

Australia exports most of its gas to customers in the Asia-Pacific region, which accounts for around two-thirds of global LNG demand, with that amount projected to increase amid more LNG usage in China and south Asia, particularly India, Pakistan and Bangladesh.

Australia’s Federal Treasurer Josh Frydenberg said two weeks ago that the government is investigating ways for the east coast market to access west coast gas. He said that west Australians have access to cheaper gas than those on the east coast.