Using the financial muscle of its global natural gas and oil portfolio, Chevron Corp. is tripling its investments in low-carbon ventures with an eye on becoming a force in renewable fuels, hydrogen, carbon capture and offsets. 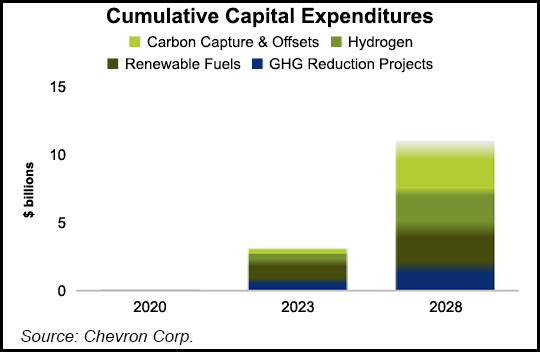 The nation’s No. 2 oil producer on Tuesday pledged to earmark $10 billion in capital spending for low-carbon opportunities through 2028, sharply up from its previous target of $3 billion.

“We don’t lay out ambitions that are not deliverable,” he said. “The planned actions target sectors of the economy that are harder to abate and leverage our capabilities, assets and customer relationships.”

Investors “are seeing a divergence of strategies as companies respond to poor stock performance and expectations for an energy transition. For our investors, you’ll see actions consistent with attributes that have long defined our company.”

The new business lines “are still early in development,” but “the opportunity and potential for advantage is greater.”

With the “rate-of-change accelerating, we have the flexibility to evolve with it,” Wirth said. “We expect returns to be competitive with our alternatives, and projected cash flow from these businesses to exceed $1 billion annually by 2030. Undoubtedly, there will be a range of outcomes with some projects working out better than others…” The goal is to deliver “higher returns, lower carbon.”

Wirth said Chevron is siding with science in its ambitions.

“We believe climate change is real and that human activity, including the use of fossil fuels, contributes to it,” he told investors. “We believe the future of energy will be lower carbon and intend to be a leader today and in that future. We believe energy enables modern life.” While “affordable, reliable energy will continue to be essential to power a growing economy and to lift billions out of poverty,” lowering the carbon intensity of oil and gas operations is imperative.

However, shareholders delivered a clear message in May, demanding more action to reduce the impacts of climate change. In a nonbinding resolution, 60% voted for Chevron to reduce emissions of its customers, aka Scope 3. Cutting Scope 1 (direct) emissions and Scope 2, which are indirect emissions controlled by a company, have become standard protocol for oil and gas operators.

Tracking and reducing customer emissions is a more expensive challenge, but management responded by launching Chevron New Energies in July. Since then, a long list of potential ventures has been unveiled. Among them are partnerships to expand renewable natural gas (RNG), renewable diesel and sustainable aviation fuels (SAF), along with advancing hydrogen, carbon capture and offsets.

“Renewable fuels, hydrogen and carbon capture target customers, such as airlines, transport companies and industrial producers,” said Chevron New Energies President Jeff Gustavson. “These sectors of the economy are not easily electrified, and customers are seeking lower carbon fuels and other solutions to reduce carbon emissions.”

How far Chevron and its like-minded peers advance the energy transition depends on how much policy support they can receive from legislators and regulators, Wirth said. He reiterated the company’s support of “well-designed climate policies, and believe a price on carbon is the most efficient mechanism to harness market forces to reduce emissions.”

The trio of “innovation, technology and policy will be the key drivers of change,” he said. “Each will continue to evolve, and developments may surprise us. We’ll know more a year from now than we do today and even more a year after that.”

California has policy support in place to advance innovation, particularly for RNG, and the San Ramon, CA-based supermajor plans to direct most of its initial efforts on the West Coast. In that region of the United States, “there’s already strong policy enablement,” Wirth said. The Gulf Coast also will be a priority, along with “select markets” in Asia.

By 2030, RNG production is forecast to reach 40,000 MMBtu/d, which would supply a network of stations serving heavy duty transport customers. Renewable fuels production capacity should increase to 100,000 b/d by 2030 to meet growing customer demand for renewable diesel and SAF.

In addition, hydrogen production is forecast to reach 150,000 metric tons/year, which would be used to supply industrial, power and heavy duty transport customers. Chevron also estimates that the carbon capture and offsets market could reach 25 million metric tons/year (mmty) by 2030 through regional hubs.

Chevron wants to change ‘the way we consume energy,” said Vice President Bruce Niemeyer, who oversees Strategy and Sustainability. For example, of the $10 billion budgeted between now and 2028, $2 billion is earmarked to reduce the carbon intensity of operations.

Cutting emissions is ongoing within the liquefied natural gas (LNG) portfolio in the Eastern Mediterranean and in Australia. A completed gas turbine optimization project in Australia at the Wheatstone LNG plant has reduced the number of turbines to three from four. Efficiencies are expected to cut CO2 equivalent emissions by around 15,000 metric tons/year, Niemeyer said.

Likewise at the Gorgon LNG export project also in Australia, Chevron has advanced “one of the largest sequestration projects in the world,” with capacity to store up to 4 mmty of CO2.

“Like CCUS, offsets will be required to achieve net zero,” he  told investors. “And customers are beginning to ask for offsets paired with product supply.”

Gustavson pointed to five-year 500,000 tons/year sales and purchase agreement reached in February with Pavilion Energy Trading & Supply Pte. Ltd. to deliver LNG to Singapore beginning in 2023. The transaction requires “each cargo delivered to be accompanied by a statement of its greenhouse gas emissions,” Gustavson said.

“We expect to be a portfolio supplier of offsets by providing more customers with offset-paired products,” he said. “In addition, we have a global carbon trading organization and actively participate on multiple registries and exchanges.”

The plan is to invest “directly in scalable, nature-based solutions, like soil carbon storage, reforestation and mangrove restoration,” to generate credits. “Offsets are critical to complement other efforts to reduce Chevron’s carbon intensity. We believe this is a space that can significantly grow, both in compliance requirements and value generation.”