Subsidiaries of Chevron U.S.A. Inc. and Toyota Motor Corp. said Wednesday they will join forces to develop “viable” and “large-scale businesses” to capitalize on the ascension of hydrogen as a clean source of fuel, including to meet expected future demand for fuel cell electric vehicles. 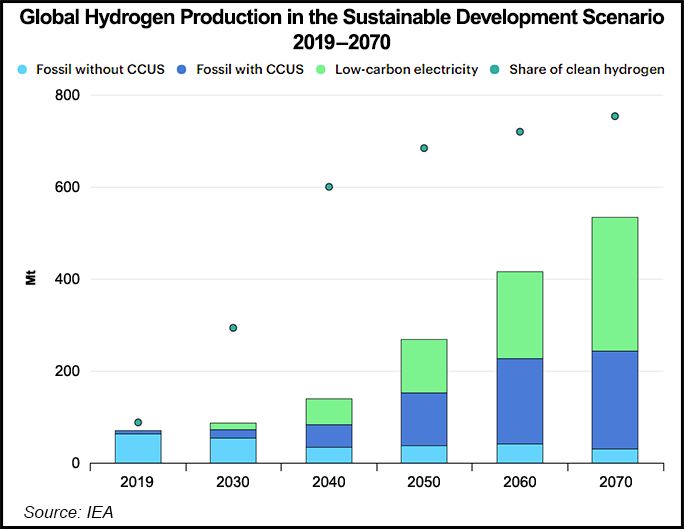 The energy and auto majors said in a joint release they would collaborate on public policy measures to support the build-out of hydrogen infrastructure and pursue research and development in hydrogen-powered transportation and storage. This could include assessing and addressing current and future market demand as well as supply opportunities for light-duty and heavy-duty fuel cell electric vehicles.

“We are excited to collaborate with Toyota. Working towards a strategic alliance on hydrogen presents an opportunity to build a large-scale business in a low-carbon area that is complementary to our current offerings,” said Chevron’s Andy Walz, president of the Americas Fuels and Lubricants division.

“This is another important step toward building a hydrogen economy,” added Toyota Motor North America Executive Vice President Bob Carter. “Combining Toyota’s decades of experience in developing hydrogen powered fuel cell electric technology with Chevron’s deep resources in the energy sector has the potential to create new transportation choices for both consumers and businesses that move us toward our goal of carbon neutrality.”

When burned, hydrogen does not emanate the greenhouse gases (GHG) scientists say damage the environment and fuel global warming. It can be delivered by pipeline or shipped and, notably, it is relatively easy to store when compared with other renewable sources of electricity such as solar and wind.

This helps explain why major oil and gas companies, under pressure from investors to demonstrate plans to shift away from fossil fuels, are beginning to trumpet commitments to hydrogen development.

Separately on Wednesday, Royal Dutch Shell plc’s Singapore arm announced plans for a feasibility study to test the use of hydrogen fuel cells for ships, marking a first for the energy giant. The company said its analysis found that hydrogen with fuel cells holds the greatest potential to help the shipping sector achieve net-zero emissions by 2050.

“This trial is an important step in demonstrating the applicability of hydrogen and fuel cells on ships,” said Shell’s Nick Potter, general manager of shipping and maritime in the Asia Pacific and Middle East. “We see fuel cells and hydrogen as a promising pathway for decarbonizing shipping and working with partners in this way will develop our understanding of this critical technology.”

Shell said it ultimately aims to develop and install an auxiliary power unit fuel cell on an existing vessel that transports goods and equipment. Partnering with SembCorp Marine Ltd., it plans to carry out a feasibility study with the intention to install the fuel cell next year. The vessel, owned by Penguin International, would operate for a trial period of 12 months.

“Hydrogen is generally regarded as a new frontier in alternative fuels for shipping,” said Penguin managing director James Tham. “The outcome of this trial…could quickly bring many ship owners to the forefront of this alternative fuel.”