Chevron Corp. surprised Wall Street on Friday with a quarterly loss, its first in 13 years, after the upstream arm was crushed by falling commodity prices. 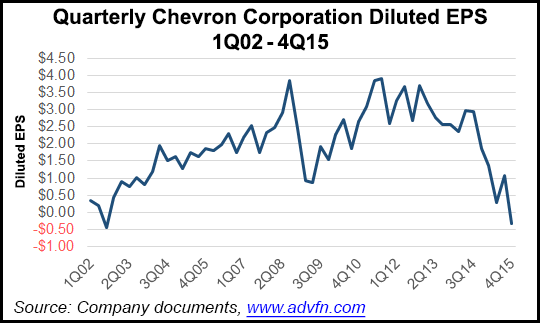 The San Ramon, CA-based producer, the second largest in the United States by revenue, is the first of the U.S.-focused majors to report 4Q2015 results. BP plc and ExxonMobil Corp. are scheduled to issue results Tuesday, followed by Royal Dutch Shell plc on Thursday.

“Our 2015 earnings were down significantly from the previous year, reflecting a nearly 50% year-on-year decline in crude oil prices,” CEO John Watson said during a conference call.

Last year the company sharply reduced operating expenses and capital expenditures, and the efficiency push is to continue, he said. Cash flow from operations in 2015 was $19.5 billion, compared with $31.5 billion in 2014. Capital and exploratory expenditures, 92% weighted to the upstream, totaled $34 billion, versus $40 billion in 2014.

“We’re taking significant action to improve earnings and cash flow in this low price environment. Operating expenses and capital spending were reduced $9 billion in 2015 from 2014, and I expect similarly large reductions again in 2016,” Watson said.

“The message that I’m trying to convey is that we are dramatically cutting investment going forward…We all have estimates of prices going forward, but in terms of longer-cycle projects, we aren’t initiating any.”

If a project now on the drawing board doesn’t meet the investment hurdle, “we won’t invest. We won’t invest just to hold volumes, but where we get good returns…We won’t fund opportunities that won’t be effective for the company.” Management “is tightly scrutinizing what we’re spending right now.”

For instance, two deepwater projects under development in the Gulf of Mexico (GOM) Lower Tertiary Trend, Buckskin and Moccasin were scuttled last year because they don’t work at today’s prices (see Daily GPI, Aug. 1, 2011). Chevron was considering a hub, but deepwater is an expensive arena and without substantial commercial resources, moving forward was not an option.

“We are trying to balance expectations with the forward curve,” Watson said.

The other avenue to ensure a flexible balance sheet is asset sales. Chevron is planning to sell $5-10 billion of assets over the next two years, but it won’t be easy, the CEO said. The list for sale includes shallow water properties in the GOM.

“It’s a terrible market to be trying to sell most assets out there, particularly oil assets,” Watson said. “From a strategic point of view, there are opportunities out there that will be tough to execute…If we can’t we won’t sell them. The kinds of things we have sold have had very good value over the last two years; we’ve limited our investments in the pipeline business. We don’t advertise what’s for sale, but in the public domain, there are potential buyers out there for good value.”

Mergers and acquisitions aren’t a priority for Chevron today, “but we are mindful of the opportunities out there. Our focus is to get projects that are under construction completed…We have a nice profile going forward, but we do need to look at what is out there. We are value driven, but there are opportunities that could present themselves.”

The Permian Basin clearly is the go-to province for U.S. onshore exploration. Chevron produced about 44,000 b/d within its unconventional portfolio in 2015, with about two-thirds of the output from the Permian’s Wolfcamp Shale.

“We’ve been on a pathway in the Permian, first assessing what we have in both vertical and horizontal wells. Over the last year all of the wells were converted to horizontal wells, and we are getting our factory model in place…Costs now are very competitive…and we want to continue that effort. Our view is that prices will not stay in the low range they are today,” but Chevron is being precise in how it deploys rigs in the basin.

“We have six operated rigs today, 14 nonoperated, and that’s about the right balance,” he said. “I’d hate to lose the momentum we have in the Permian, with some of the cost reduction efforts we have underway. We have 3,000 locations that meet the economic threshold at $50/bbl. Obviously, prices aren’t $50 today, but it’s indicative of our portfolio.”

The CEO was asked if he has uncovered any silver linings from the downturn.

“It is very tough times,” he said. “I think the cost reductions we’re going after will be permanent, with the efficiencies gained in drilling in the Permian, regardless of the rig rates going forward, and in deepwater and onshore.” There are “benefits taking on organizational and structural changes and a lot will be permanent. We undervalued what simplification can provide. We are taking out layers, rolling reorganization around the world…and that simplicity and clarity is a positive for business.”

There also are positives in terms of “resource recapture,” he said. “There are better opportunities than maybe a year ago” as technology and efficiencies have improved. “The balance between expectations and the value of resources is getting better aligned and there are opportunities emerging…”

The upstream division suffered the biggest blow during the final three months of 2015, with the U.S. segment losing $1.95 billion in the quarter after recording profits of $432 million in the year-ago period. For the year, the U.S. upstream arm lost more than $4 billion, compared with profits of close to $3.33 billion in 2014.

The global downstream business, often a reliable assist for ailing upstream operations, was in the black, but profits fell by almost half year/year to $496 million.

The downstream portfolio, said Watson, is being reshaped, “with well-timed asset sales and good progress on petrochemical investments.”

Several major upstream projects advanced last year, including the startup of production from the Jack/St. Malo facility in the deepwater Gulf of Mexico (see Daily GPI, Dec. 3, 2014). Shale and tight resources in the Permian Basin also contributed to the production gain, Watson said.

The largest additions were from production entitlement effects in several locations and drilling results for the Permian Basin and the Wheatstone liquefied natural gas (LNG) export project in Australia.

The Gorgon LNG project, Watson said, should be producing LNG within the next few weeks” (see Daily GPI, Jan. 19). “Successful completion and start-up of these and other major capital projects will translate into significantly lower capital spending, higher production and growing cash generation in the months ahead.”

At the end of 2015, balances of cash, cash equivalents, time deposits and marketable securities totaled $11.3 billion, down $1.9 billion year/year. Total debt stood at $38.6 billion, an increase of $10.8 billion from 2014. Net charges in fourth quarter were $238 million, compared with $720 million in the year-ago period.