Chevron Corp. has regiggered its global natural gas and oil portfolio over the past year, with the priority today going to the “highest value investments,” CFO Pierre Breber said Friday.
Breber shared some insight into first quarter performance and the outlook ahead during a conference call. He explained how the San Ramon, CA-based energy major has reshuffled the portfolio during the pandemic while integrating Noble Energy Inc. operations. 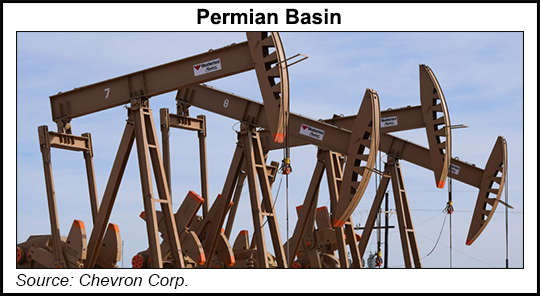 With Noble, Chevron captured a cupboard of global natural gas prospects across the Eastern Mediterranean which blend with its solid basket of liquefied natural gas (LNG) projects in Australia and beyond.

“As we focused our activities on the highest value Investments, we also worked hard to preserve the value of the projects we were pacing,” Breber told analysts. There’s no rush to expand production until oil and gas demand recovers. There are some areas of the world still in lockdown.

“We’re not yet in a sustained global economic recovery,” he said, but “feel very good about where we are here in the United States and several other countries. But there are a number of countries where we are still working to get control of the virus…We’re not going to increase the capital this year and we have tight guidance out five years. We have the balance sheet in a very good place…”

Within the global projects, organization has played “a critical role in this, working closely with contractors, partners and resource owners to find efficiencies and reduce spend. Every project was reevaluated and tested against conditions, informed by the pandemic. While all remained attractive in our portfolio, the highest value opportunities were given priority.”

As it has revamped the strategy, a confluence of factors dinged overall results in the first quarter. Chevron still was in the black, and capital spending came down by 43% from a year ago.

Profits were down in part because of downstream margin and volume effects, as well as from Winter Storm Uri. The freezing storm in February knocked out power across Texas, forcing producers to shut in wells and refiners to close down operations.

With the impacts overall, net earnings fell year/year to $1.4 billion (72 cents/share) from $3.6 billion ($1.93). Pension settlements and legal reserves reduced profits by $351 million, while foreign currency effects decreased earnings another $2 million. Operational cash flow fell to $4.2 billion from $4.7 billion. Capital spending was down 43% at $2.5 billion.
The U.S. upstream proved to be a bright sign, lifted by rising natural gas and oil prices. Profits jumped to $941 million from $241 million. Average U.S. natural gas sales prices were $2.15/Mcf in 1Q2021, versus 60 cents in the year-ago period. Average crude and liquids prices sold for $48/bbl versus $37.

Among other things, maintenance has shut down part of the Gorgon LNG export project in Australia, which Chevron operates with a 47.3% stake. It temporarily took the system offline last year for repairs after welding cracks were discovered. Inspections for a third train are scheduled to take place into June, with repairs to follow if necessary. Chevron also operates the Wheatstone LNG export project in Australia.

Because Chevron is checking each train, there’s been one train down at Gorgon “since mid-year last year,” Breber noted. “The real opportunity cost from the Gorgon downtime was not participating in the spot market. So we didn’t get the benefit of it being relatively balanced. There were some trading puts and takes…in the LNG spot market, but nothing worth pointing out.”
Meanwhile, the U.S. downstream operations reported a loss of $130 million, compared with year-ago earnings of $450 million. The decrease resulted from lower margins on refined product sales and lower sales volumes.

Refinery crude oil input decreased 9% to 881,000 b/d in 1Q2021 from a year earlier, as the company reduced refinery runs in response to lower demand. Refined product sales were 1.05 million b/d, also down 9%, because of “lower jet fuel, gasoline and diesel demand associated with the pandemic,” management said.