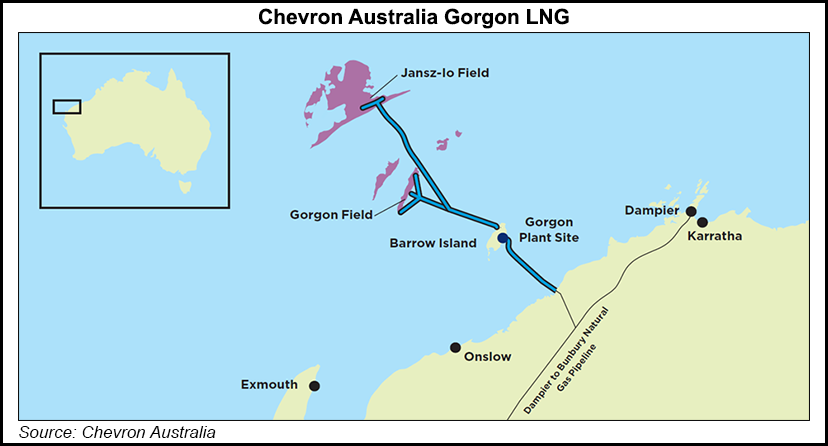 Investing in the CO2 offsets would address a five-year emissions “injection shortfall” at the facility, Chevron said. The package would allow the energy major to fulfill “regulatory obligations through the acquisition and surrender of 5.23 million greenhouse gas offsets.”

Gorgon gained regulatory approval to proceed in 2006 by Western Australia, but there were conditions imposed for the project on Barrow Island, which is a nature preserve.

The CO2 from the gas produced offshore for Gorgon is required to be buried under the island. Chevron also is required to use “all practicable means” to inject the reservoir CO2. At a minimum, 80% of the emissions have to be buried over a five-year rolling average.

Over the five-year measurement period that ended in mid-July, an estimated 15.3 million metric tons (mmt) of CO2 from the offshore gas fields flowed to Barrow Island. Of the total, 4.9 mmt, or 32%, was buried. The injected amount fell short of the requirement by around 9.5 mmt, missing the 80% minimum by 7.4 mmt.

Not Liable For Entire CO2 Shortfall

Chevron and its partners are not liable for the entire CO2 shortfall, however.

Western Australia last year revised the environmental conditions for Gorgon that were associated with the second and third LNG trains. Emissions from the two trains were excluded before July 2018 because they were in operation under a construction license; the operating license was issued in mid-2018.

Chevron Australia managing director Mark Hatfield said “significant emissions reductions” had been made at Gorgon through the carbon capture and storage system, despite the early challenges.

“Since starting up in August 2019, the Gorgon carbon capture and storage system has safely injected approximately 5.5 mmt of greenhouse gas emissions and is demonstrating the importance of CCS technology in advancing a lower carbon future,” Hatfield said.

“We take our regulatory obligations seriously. The package we have announced will see us make good on our commitment to offset the injection shortfall, and ensures we meet the expectations of the regulator, the community and those we place on ourselves as a leading energy producer in Australia.”

Further discussions with the government officials in Western Australia are planned “to develop lower carbon projects and unlock emissions reduction potential across the state.”

Chevron Australia also operates the Wheatstone LNG facility. In addition, the Australia unit manages a stake in the North West Shelf Venture and an onshore oilfield on Barrow Island. Via Puma Energy, the Australian arm also delivers retail fuel and services across the country.