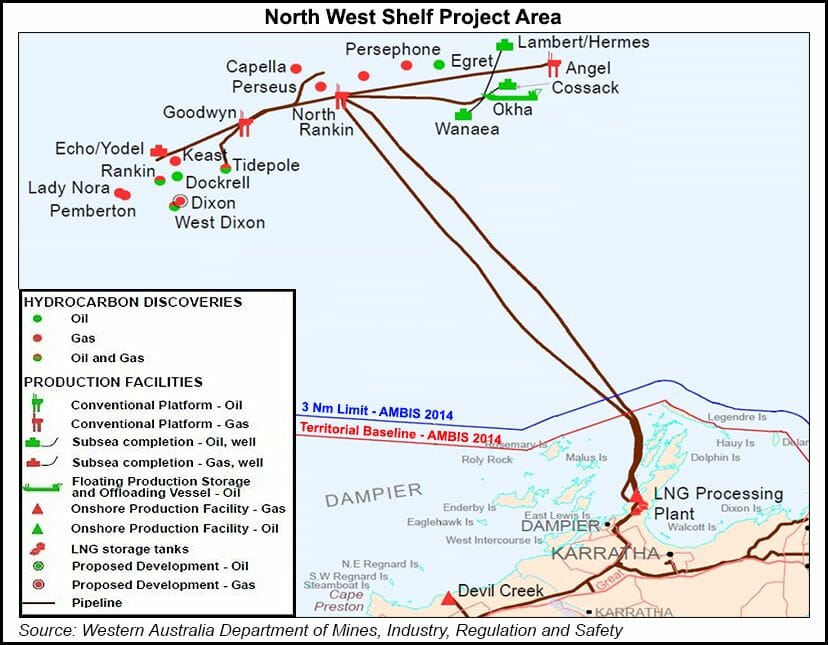 The U.S. supermajor said it made the decision to begin marketing the stake after receiving “a number of unsolicited approaches from a range of credible buyers.”

The move also comes as the massive facility is shifting to a tolling model under which it would charge third parties to liquefy gas as offshore reserves are dwindling.

“The NWS project is shifting its focus toward becoming a globally competitive, third-party tolling facility and this is the appropriate time for Chevron to consider fair value proposals from potential buyers for its interest,” the company said.

Located on Australia’s northwest coast, NWS produces oil and gas from fields in the Carnarvon Basin. It supplies gas to both Asia and Western Australia. The facility, which includes five trains, has produced the super-chilled fuel for more than 30 years and delivered more than 5,000 cargoes during that time. Chevron has been a stakeholder since it was founded.

Chevron did not disclose the companies that have inquired about buying its stake. NWS is operated by Australia-based Woodside Petroleum Ltd., which has an equal stake in the project, along with subsidiaries of BHP Billiton Ltd., BP plc, Royal Dutch Shell plc and Japan Australia LNG pty Ltd., a joint venture of Mitsubishi Corp. and Mitsui & Co.

Last year marked an all-time record increase in annual LNG production across the globe, driven by liquefaction trains and ramp-ups in Australia, Russia and the United States, according to the International Group of Liquefied Natural Gas Importers. Chevron said Thursday it remains committed to majority owned and operated Gorgon and Wheatstone projects in Western Australia, key LNG assets in its global gas mix.

While LNG demand is forecast to continue growing, the energy market has also been roiled by the Covid-19 pandemic, which has cut demand and left oil and gas inventories spilling over. Major LNG players have taken $80 billion of investments off the table this year, according to one recent estimate from shipbroker Poten & Partners, while at least 85 million metric tons/year of capacity has been postponed, including projects in Australia.

Chevron took a $10.4 billion impairment on its assets in 4Q2020 because of falling commodity prices and said it would slash spending. It said recently it was on track to complete its asset sale program, which is targeting $5-10 billion of divestitures between 2018 and 2020.

The company is also planning to sell its 50% working interest in the Kitimat LNG export project in British Columbia as part of efforts to optimize its global portfolio. Woodside holds the other 50% interest in Kitimat.