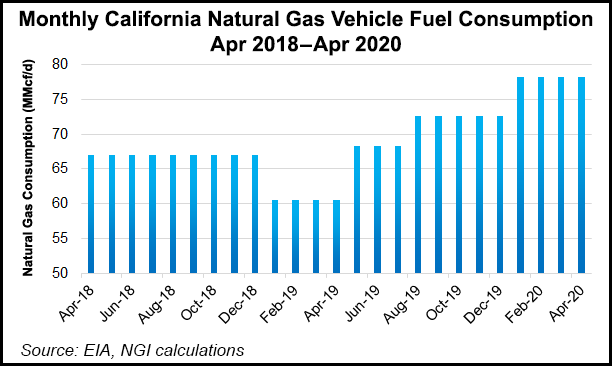 Three years ago, commissions overseeing the Long Beach and Los Angeles Ports, the nation’s busiest handling 40% of U.S. imports, jointly approved sweeping air pollution plans calling for the eventual electrification of equipment and operations, including trucking. Proponents at the time estimated that the cost of implementation would range from $7 billion to $14 billion.

The new partners are joining forces on an initiative dubbed Adopt-a-Port, which Chevron will fund, along with supplying RNG to Clean Energy’s stations near the adjacent ports, about 25 miles south of downtown Los Angeles.

With the Chevron funding, truck operators will receive some subsidization for their cost of buying new RNG-powered trucks. Clean Energy will manage the program and provide its RNG Redeem brand to qualified truck operators.

Mike Vomund, Chevron’s vice president for Americas Products West, reiterated the global major’s commitment to increasing its support for renewables and plans to “innovate in the low-carbon fuel space.”

Earlier this year, Clean Energy renewed or signed new contracts for its Redeem RNG, supplying numerous trucking fleets, refuse fleets and transit agencies, whose services have been crucial during the past four months of the Covid-19 lockdown.

Among the projects by Clean Energy were completion of a time-fill natural gas vehicle (NGV) station for the City of Chesapeake, VA, which added 12 new refuse trucks to increase the fleet to 60 and the city contract to 2.5 million gallons of RNG over the next five years. USA Hauling added a fourth NGV fueling station at its Waterbury, CT, yard, including a 30-truck private time-fill that is to supply 1.8 million gallons over the next five years.

Two major environmental groups, EarthJustice and Sierra Club, on Tuesday indicated they are exploring what future there might be for renewable fossil fuels, such as RNG. The organizations plan to release a report soon, to be titled, “Rhetoric vs. Reality: The myth of RNG for building decarbonization.”

Communities across the country are enacting gas bans in new buildings and examining the future of their local gas utilities, which is all “adding to intense pressure for gas interests to illustrate that existing and future gas infrastructure can be maintained in a carbon-constrained future,” said Sage Welch, a spokesperson for the environmental groups.

Elsewhere on Tuesday, Environmental Defense Fund (EDF) Senior Attorney Alice Henderson said a broad coalition of stakeholders, including California, Michigan and more than 20 other states, have sued the Trump administration over its attempt to invalidate states’ “landmark authority” to establish clean car standards.

“Now former Republican and Democratic heads of the Environmental Protection Agency and Department of Transportation, along with a wide variety of legal and technical experts, physician-led public health advocates, local government representatives, businesses, members of Congress, and others have filed amicus briefs supporting our lawsuit,” Henderson said.

Similarly, the four-county Puget Sound region in Washington state last year drafted clean fuel standards that drew attention from alternative fuel and environmental advocates alike, and NGVs appear to be included in some of the changes. The GHG standard was to be reduced to 25% below 2016 levels by 2030.

An analysis done for the air agency by consultancy ICF International Inc. found that the region uses one billion gallons a year of gasoline and 220 million gallons of diesel fuel. Transportation fuels account for 25% of GHG emissions in the Seattle-Tacoma metropolitan area.

Near-zero emission trucks running on renewable natural gas are not covered under the rules, but they are to be addressed in August by the California Air Resources Board (CARB). CARB’s goal is to accelerate the first wave of ZEV trucks, with an eye on 100% ZEV fleets by 2040. The rules could also support hydrogen fuel cell technology.

“A key measure in CARB’s Mobile Source Strategy is the establishment of low oxides of nitrogen (NOx) engine emission standards that result in a 90% reduction in NOx emissions compared to the emissions of today’s diesel engines,” said spokesperson Karen Caesar.