Chevron Corp. executives made clear on Friday that any Permian Basin pipeline constraints would be resolved in short order, saying such limitations are unlikely to slow down activity as it moves to export more oil overseas and expand midstream operations to take care of natural gas and liquids. 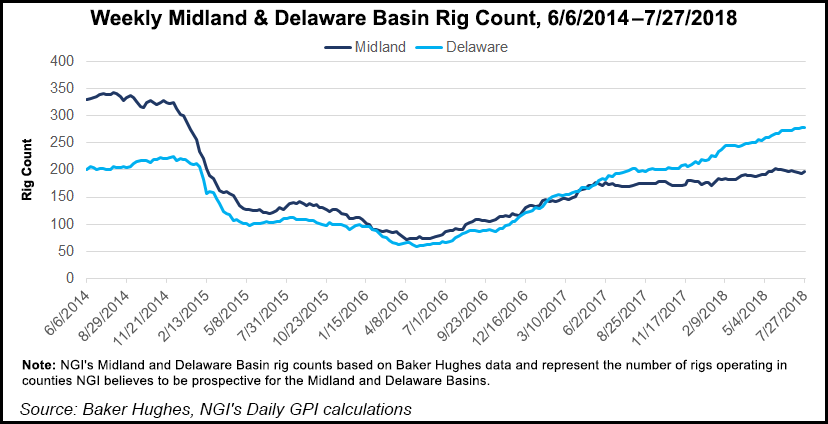 The San Ramon, CA-based supermajor is running 19 rigs in the Permian today and so far has suffered no supply shortages, upstream chief Jay Johnson said during a conference call to discuss second quarter results.

Chevron now has eight development areas underway across the Permian in the Delaware and Midland sub-basins. It is participating in about 30 joint venture (JV) developments that other companies operate. Year-to-date it also has “transacted 31,000 acres through swaps, joint ventures, farm outs and sales,” Johnson said, with the swaps allowing it to “core-up acreage and enable long-length laterals.”

“Chevron has secured firm transport capacity at competitive rates to move the equivalent of nearly all of our forecasted 2018 and 2019 operated and JV take-in-kind-oil production to multiple markets, including the U.S. Gulf Coast,” he said. Because of the contracted arrangements, production “is not materially exposed to the Midland basis differential.” Pipeline takeaway capacity and production “don’t always move in perfect lockstep. There will be periods of tightness and length.”

For example, in June Chevron had more than 50,000 b/d of excess takeaway capacity out of the Midland sub-basin, which it monetizes through purchases of third-party volumes.

“We expect that excess capacity to attenuate through the rest of the year as our production continues to grow” for oil, gas and natural gas liquids (NGL) Johnson said.

Chevron has agreements in place to access more capacity early next year. This month it used firm dock capacity in the Houston Ship Channel to gain access for Permian oil exports, with plans to increase dock capacity in 2019.

“Overall, we’ve exported more than 8 million bbl of liquids from the Gulf Coast in 2018, further demonstrating our midstream’s ability to batch, blend, trade and export to secure the highest value for our products,” Johnson said. “We’re developing processing arrangements for NGLs, and we have flow assurance for natural gas to ensure the production will not be impacted.

“We are moving forward with our development plans in the Permian, and we do not

intend to slow down activity or divert capital.”

Chevron’s worldwide production was 2.83 million boe/d net in 2Q2018, modestly higher from 2.78 million boe/d a year ago. Shale and tight production from the Lower 48 climbed by 91,000 boe/d, primarily from a 38,000 boe/d gain in the Permian. The Hebron field offshore Canada also ramped up, and there was progress in the Gulf of Mexico via the Stampede and Tahiti vertical expansions.

“With the successful startup of Wheatstone Train 2, continued growth in the Permian and ramps up at Hebron, Stampede and Tahiti vertical expansion project, we expect production to further increase in the second half of this year,” Johnson said.

The second largest U.S. oil and gas producer after ExxonMobil Corp., which also reported results on Friday, delivered quarterly profits of $3.4 billion ($1.78/share), sharply higher from $1.5 billion (77 cents) in the year-ago period. Included in the current quarter was a $270 million write-down charged to operating expenses.

Revenues improved to $40 billion from $33 billion.

The U.S. upstream arm earned $838 million, reversing a year-ago loss of $102 million, while profits from domestic downstream operations rose to $657 million from $634 million. Chevron fetched on average $59/bbl for U.S. crude oil and NGLs from $41 a year earlier. However, the operator only received $1.61/Mcf on average for its U.S. gas, down from year-ago prices of $2.32.

Still, cash flow is improving on higher upstream margins and volumes, “combined with disciplined spending,” said CEO Michael Wirth. The better cash flow is enabling Chevron to initiate share repurchases, which are expected to be $3 billion/year based on the current outlook.