The sharp upturn in energy demand, which has escalated since Russia invaded Ukraine, has created a big opening for Chevron Corp. to ramp up once again in the massive Permian Basin and ponder whether it’s time to invest in U.S. liquefied natural gas (LNG), CEO Mike Wirth said Friday. 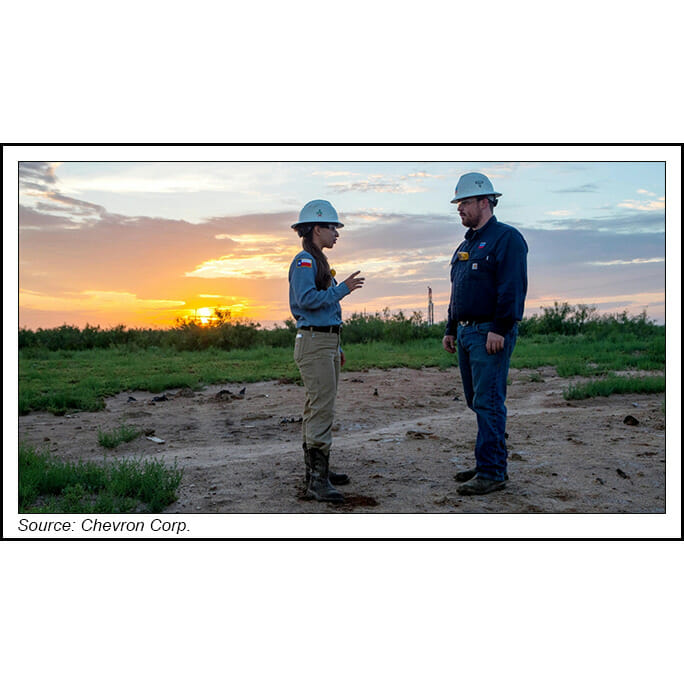 In sharing the 1Q2022 results, Wirth explained to analysts that the pandemic-created slowdown in demand is long gone. The San Ramon, CA-based supermajor had pulled back on activity in the basin as Covid-19 crushed consumption and prices, he noted. During the first quarter, though, the pandemic was a bad memory. Permian unconventional output increased to a record 692,000 boe/d from year-ago volumes of 597,000 boe/d.

“What happened,” said Wirth, is “we ended up with an inventory of drilled but uncompleted wells,” aka DUCs, “that grew beyond what would be kind of a normal run rate for our rig fleet…And so, we’ve been working through that. We’re back down now to…a ‘more normal’ factory model.”

DUCs are always “out in front of the completions,” the CEO said. “But they had grown to a larger than normal rate.” As prices and consumption have improved, DUCs are “the first place you turn..As you see the cycle turn, it’s completing those wells to get that production online, and we’ll be moving into a more of a factory model.”
Joint venture bookings in the Permian also contributed to a strong first quarter showing. That said, the initial guidance through the rest of the year is out the window. Guidance is set at a 15%-plus increase from 2021, or 700,000-750,000 boe/d.

LNG opportunities, of which Chevron has many –including two in Australia– also are gaining momentum. Asked about the potential growth for the segment, Wirth said the gassy Eastern Mediterranean portfolio is turning out to be a “wonderful asset.”

The Leviathan platform, one of the linchpins of the Eastern Mediterranean business, “recently completed a project to increase infrastructure access to regional markets, and we’re actually flowing more gas into Egypt as a result of that,” the CEO said.

“We’re looking at a number of other opportunities to further increase production because the resource there is quite prolific. That includes further coal-to-gas switching in Israel for the regional supply into neighboring countries.” There also is the potential for power generation through the region using floating LNG.”
“A number of different commercial options…are being evaluated…so more to come as those mature,” Wirth said “But it’s an area of high priority for us because of the market demand for it.
“When you look at the at the U.S., clearly we’ve got a lot of gas production here that…are in the process for LNG export facilities. We’ve had discussions with a number of those developers.”

Wirth said he had “nothing more to say than we’ve had discussions at this point. But that’s a part of our LNG portfolio that we’ve been very focused on the Pacific Basin historically.

Chevron also is accelerating plans to grow its renewable fuels business with an agreement to acquire Renewable Energy Group Inc. It also has clinched agreements with Bunge North America Inc., among other renewables businesses, to advance hydrogen, carbon capture and offsets projects.

For the international operations, Chevron fetched an average sales price for crude oil and liquids of $93/bbl from $56 in 1Q2021. Natural gas garnered an average $8.87/Mcf, compared with $4.72.