The first British Columbia (BC) project in Kitimat to move liquefied natural gas (LNG) exports overseas is no longer on the funding list for Chevron Corp., which has been partnering in the proposal with Australia’s Woodside Energy Ltd. 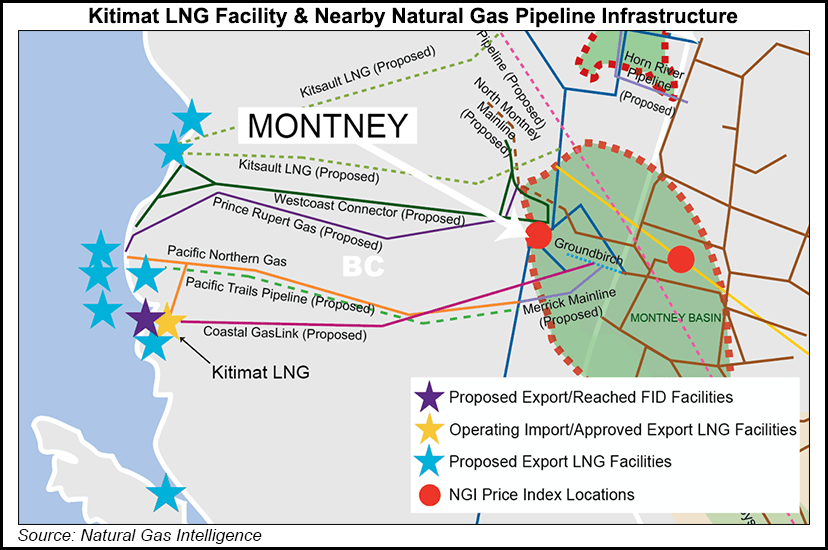 The Kitimat LNG project owner and would-be operator announced a halt to all of its spending on the project. The export project was initially launched in 2012 by Chevron and former partner Apache Corp., which sold its stakes to Woodside in 2014.

Chevron said its decision to halt funding followed an unsuccessful effort since December 2019 to sell its 50% share.

Chevron called its LNG withdrawal part of a “global portfolio optimization effort focused on improving returns and driving value.” The supermajor has LNG projects already in operation in Australia with Wheatstone and Gorgon. It also has opportunities to export gas from the Eastern Mediterranean.

Woodside Energy International (Canada) Ltd., which is overseeing the project, said Monday it had not given up hope for the project, which is to be sited in Bish Cove. However, the Canadian arm of Australia’s Woodside has disclosed no project budget.

“Woodside continues to work with Chevron to find a mutually acceptable solution that enables the project to progress and Chevron to exit,” executives said. “Woodside is continuing to work with our stakeholders to improve the cost competitiveness of the proposed project.”

Kitimat LNG began originally as an import terminal, one of about 50 in North America as gas supply was dwindling in the early 2000s. The plan switched to exports as horizontal drilling and hydraulic fracturing ended fears of gas shortages.

Since its birth as an import terminal, the project also went through a series of ownership changes. The Kitimat LNG import sponsor evolved into Pieridae Energy Ltd., owner of the delayed Goldboro LNG export terminal proposal offshore Nova Scotia on the Atlantic coast.

Chevron’s Kitimat LNG spending halt came as no surprise and aroused little reaction. The Canadian gas industry and its supporters previously turned their attention to other LNG plans.

The planned Kitimat LNG site would be capable of up to 2.3 Bcf/d of exports.

The Haisla Nation proposed another export terminal in Kitimat in September 2019. The tribe is working on obtaining regulatory approval for a more economy-sized plan named Cedar LNG, a C$1.8-2.5 billion ($1.4-2 billion) proposal for capacity to export 400-500 MMcf/d.

By targeting low-cost supplies from the west coast’s liquids-rich Montney Shale, the Haisla project would avoid an expensive Kitimat LNG legacy: reliance on the dry gas formations, Horn River and Liard, along the province’s remote border with the Yukon and Northwest Territories.

Horn River and Liard drilling have ended and their production and reserves are shrinking, according to the BC Oil and Gas Commission (BCOGC).

The Montney, accessible from the industry’s northern base in Fort St. John, accounts for 86% of gas production and all drilling in the province, according to BCOGC records.