Chevron Corp. has finished cleaning up the site of an abandoned well that leaked more than one million gallons of oil and water in California’s San Joaquin Valley. 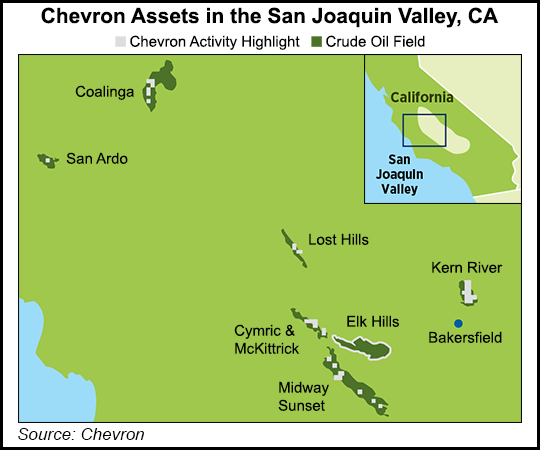 A surface expression flowed intermittently in the Cymric oilfield between May and August. An earthen dam contained the seepage until the cleanup was completed.

Earlier this month, Chevron U.S.A. Inc. was assessed a civil penalty of more than $2.7 million for violations that state regulators claim caused the seepage in Kern County. The California Department of Conservation’s Division of Oil, Gas and Geothermal Resources (DOGGR) said the Chevron unit allowed a series of leaks on at least four occasions since May when the incident was first reported.

“This expression is several miles from any community and does not pose a threat to drinking water,” said DOGGR spokesperson Teresa Schilling. “A combination of shutting in nearby wells and activating idled production wells to ease pressure on the formation appears to have halted the flow [at Cymric].”

Going forward, Chevron operations will continue to be bound by DOGGR’s orders and other enforcement documents the state division has issued related to Chevron halting surface expressions in the oilfield.

Surface expressions can occur when steam injected under pressure to produce oil breaks through geologic barriers and comes to the surface.